So far this year I’ve seen big increases in viewer activity on Tahoe Trail Guide and my YouTube channel.

But the increased activity isn’t without its drawbacks. The further my words and videos extend, the more people become exposed to them. And, believe it or not, there are some critics out there. 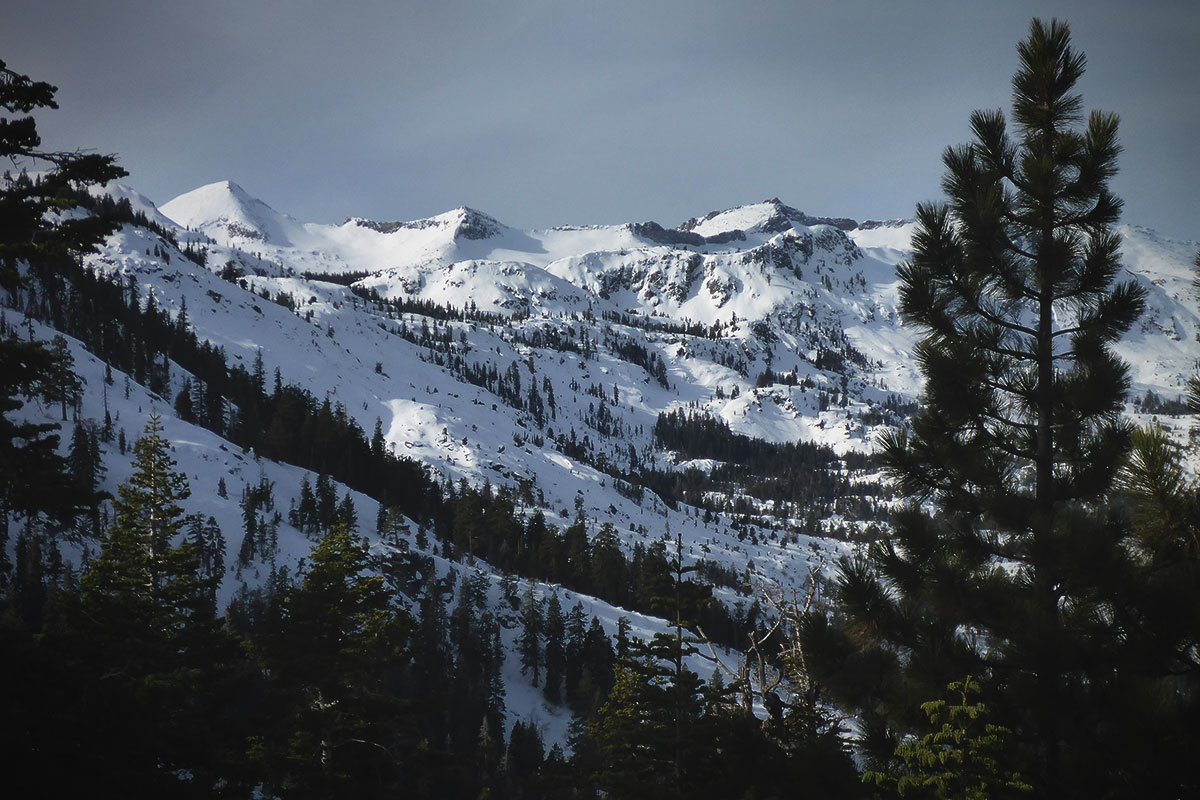 View of Desolation Wilderness on January 15, 2020. Pyramid Peak is the peak on the left side of the mountain range. © Jared Manninen

We obviously can’t please everybody all of the time, but I try to do my best.

I like to believe that what I offer are universal lessons about exercising autonomy and experiencing adventure.

Who doesn’t want that in their life?

So whenever somebody takes issue with my work, it gives me pause for thought. I treat the confrontation as an opportunity to learn, be professional, and establish myself as a credible resource. 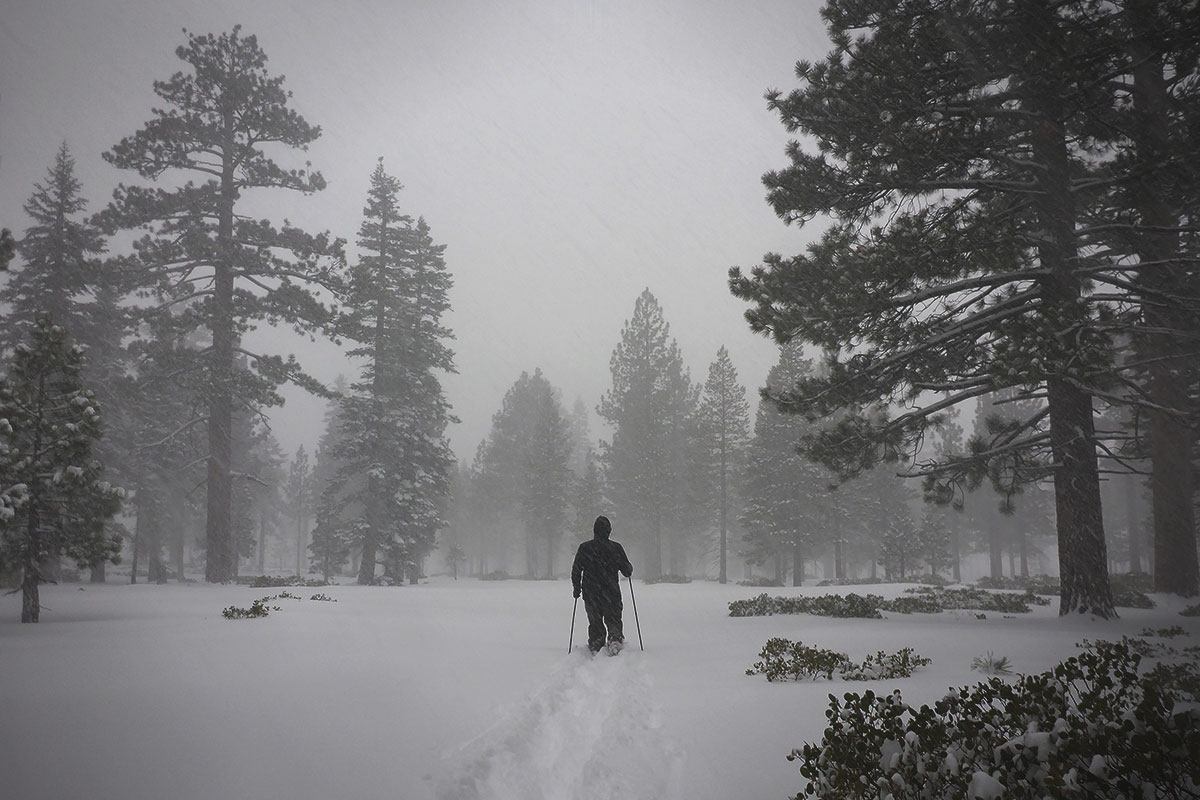 Embracing the storm by heading out the front door and into the backcountry on January 16, 2020. © Jared Manninen

In all fairness, I’ve only received a handful of critical comments compared to an overwhelming number of likes and new subscribers. However, a recent comment that got under my skin was in regards to a snowshoeing video that I published last winter (2018/19).

The comment initially struck me as being odd because … who’d be critical of someone demonstrating basic snowshoeing techniques?

Then I re-read the comment, focusing on the part that said something like traditional snowshoes are the best…

“The old wooden types with the latticework of rawhide?” I asked myself. “Do people even still use those?” 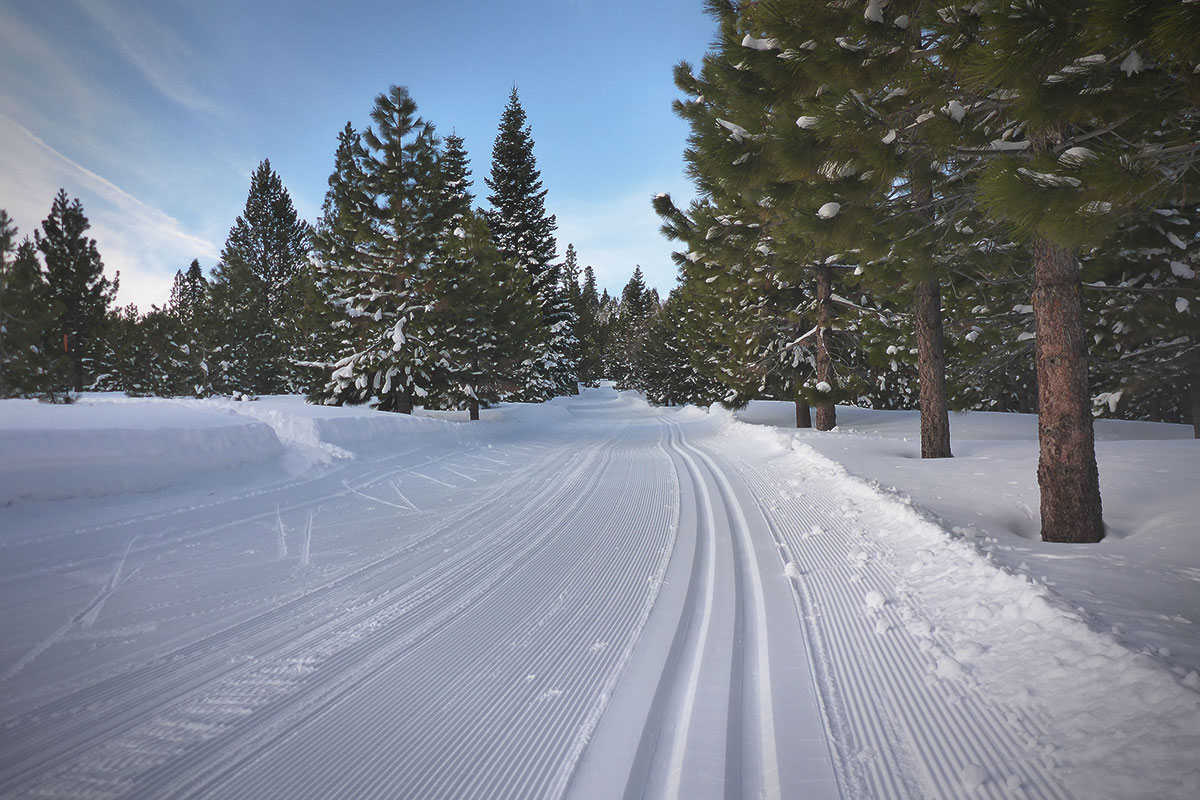 During my brief research into traditional snowshoes, I discovered numerous videos of dudes wearing buckskin coats and beaver skin hats walking across snow-covered meadows in an effort to determine the “best” snowshoe. Was it the Ojibwa? Bear Paw? Modified Bear Paw? Huron? Alaskan? Or, was it that little plastic one that someone picked up from Costco last week?

Let me tell you … the winner was never the modern snowshoe no matter the brand. In fact, mostly the modern style was included in the contests simply to illustrate its inferiority to its traditional brethren. 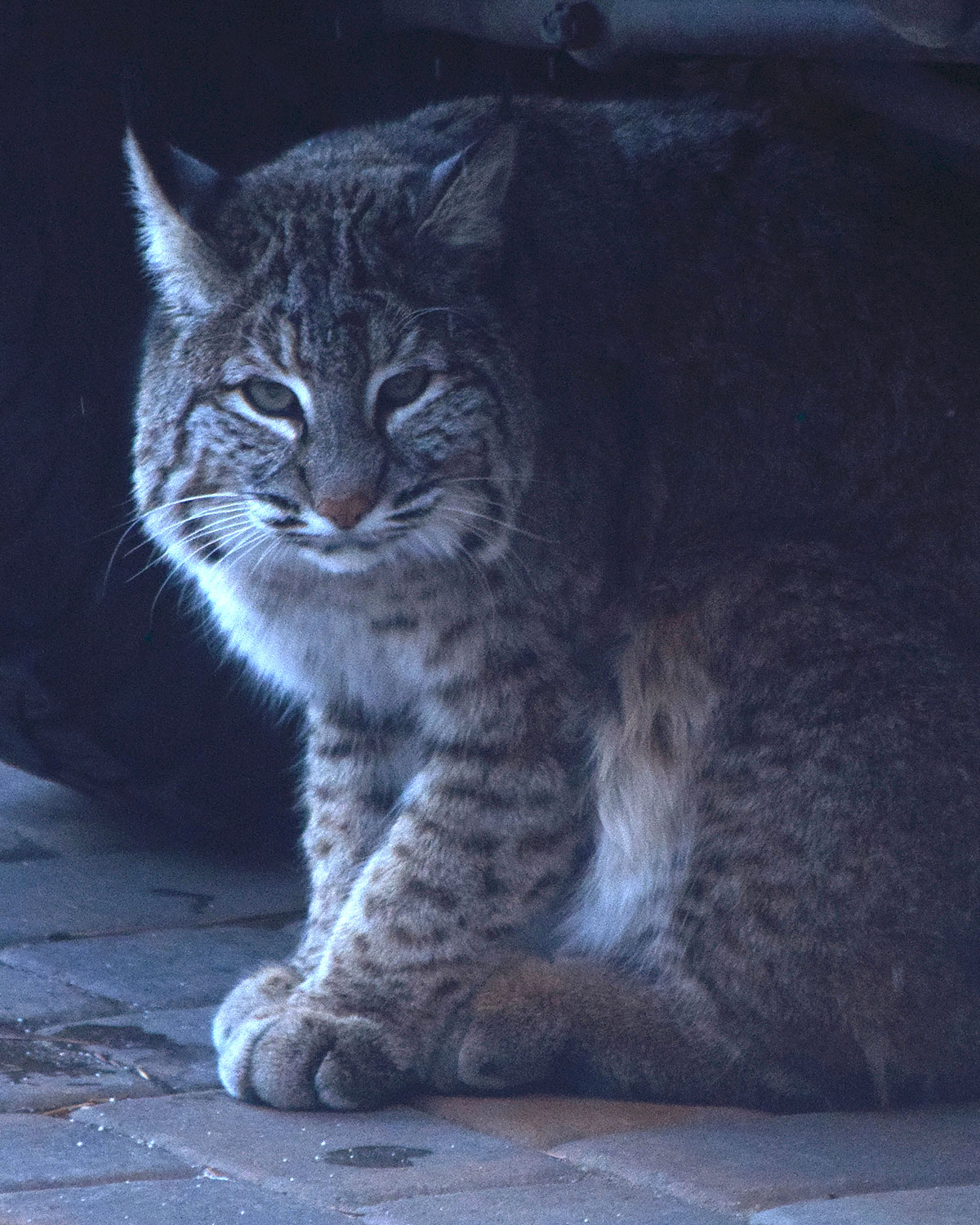 2020 started out wonderfully thanks to seeing this beautiful Bobcat on January 13. He sat beneath my Jeep for about an hour while I watched him from the comfort of my bedroom. © Jared Manninen

My video basically replicated the same scenes featured in those snowshoe comparison videos. There I was hiking short distances through thigh-deep snow across gently rolling terrain. So, apparently, this just fed into the commenter’s belief that modern snowshoes are worthless junk compared to the old ways.

Let’s just put a pause on life and live as if it were 20, 40, 100+ years ago, because life was so much better back then. I imagine it was for some people.

Anyway, confirmation bias is a powerful elixir. It provides that affirmation that you’re always right. But it doesn’t really help you learn anything new now, does it?

Of all the videos I watched, I never saw the testers hike up or down steep hills (let alone mountains), through dense forests, or across wind-scoured and icy terrain. They just traveled across the flat and rolling terrain covered in deep snow that makes for an ideal setting to “test” the larger and more cumbersome traditional snowshoes. 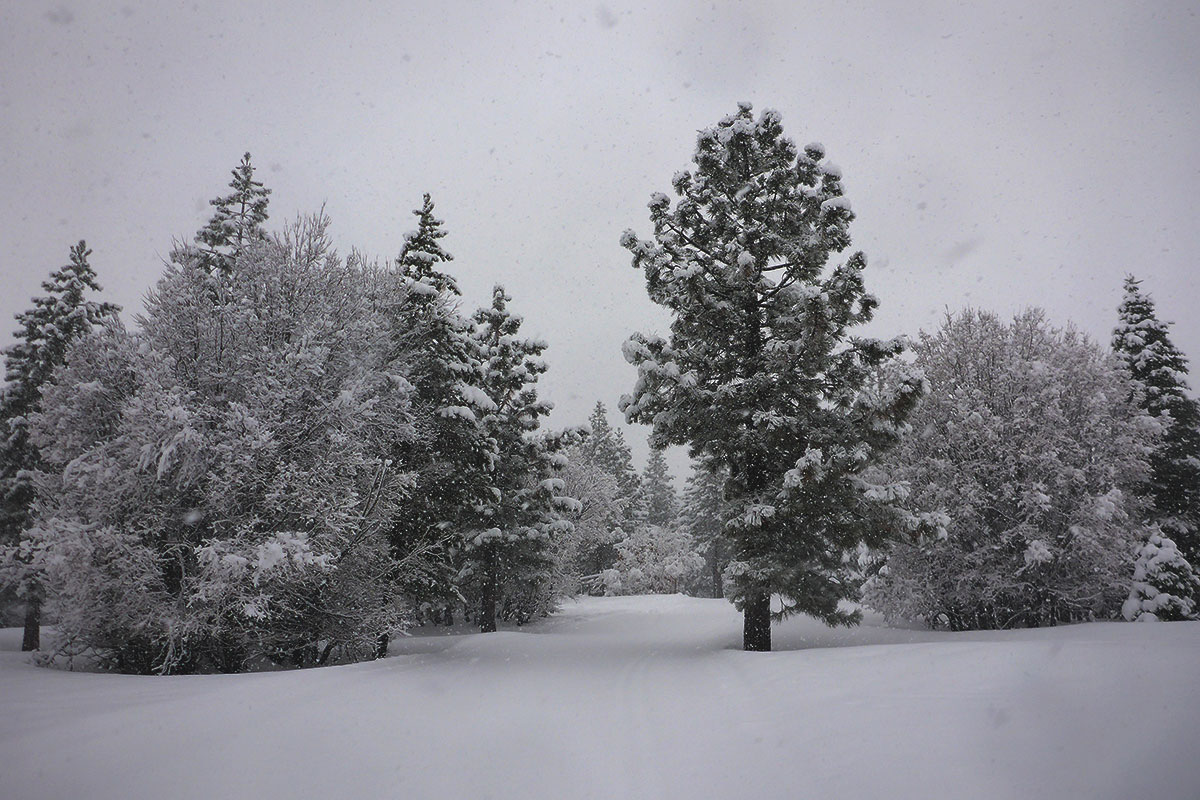 In the Sierra Nevada, however, our winters run the gamut. We can experience multiple feet of dry snow accumulating in a short amount of time. Then those storms will often be followed by days of sunshine and 40 (F) degree temperatures causing the snow to set. From there, we’ll often be stuck in a freeze-thaw cycle until the next snowstorm hits. We do have open meadows and dense forests. But no matter where you travel in the Sierra Nevada, you’re bound to encounter sections of hard-packed, wind-swept, and icy terrain.

Traveling in the backcountry, in my opinion, with snowshoes that aren’t agile enough to negotiate natural obstacles or don’t feature crampons that can deal with variable snow conditions is a dangerous practice.

For the conditions in which I was snowshoeing during my video, I agree that a larger set of snowshoes would’ve been beneficial. But no matter how important it is to have the right tool for the job, it’s always more important to know technique. 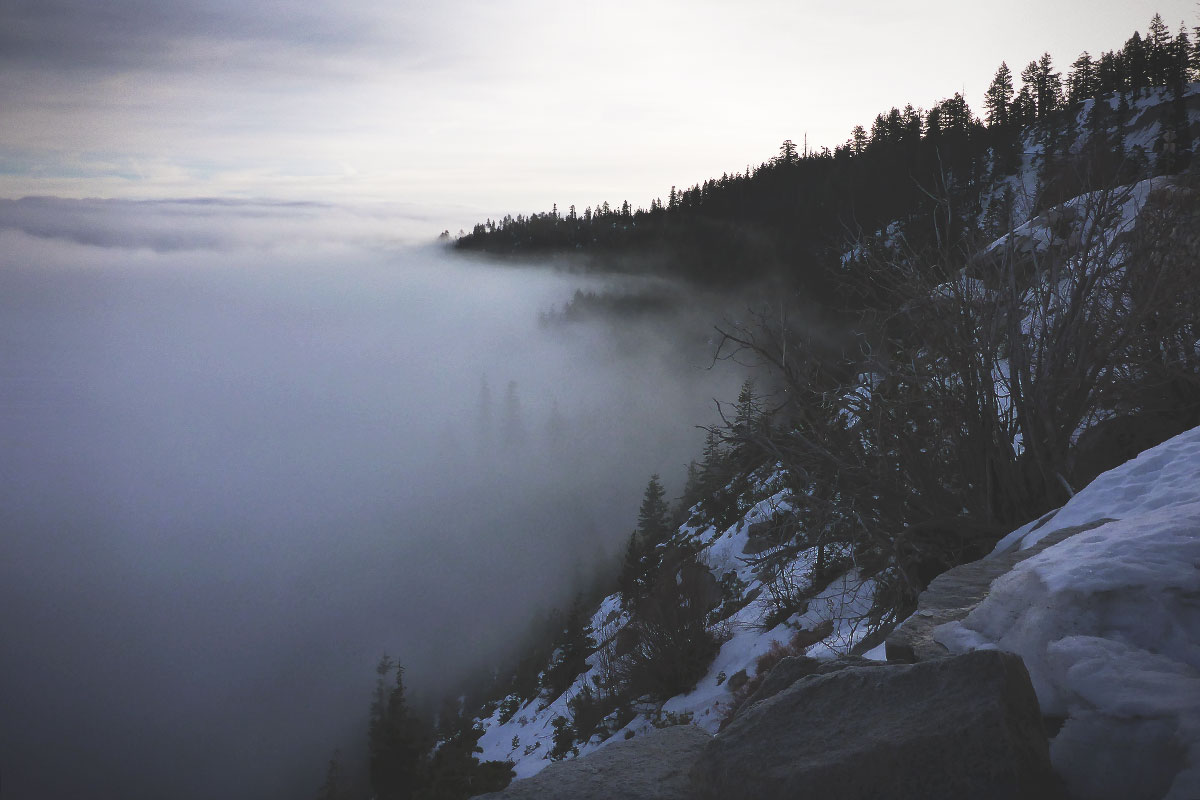 For example, having a 4×4 vehicle alone won’t guarantee you’ll never get stuck in a snowbank. To fully reap the benefit of having that four-wheel drive capability, you still need to know how to drive in snowy conditions. During my first 12 years of living at Lake Tahoe I owned a two-wheel drive car. I admit that it was stressful and a bit reckless at times, but I managed because I know how to drive in the snow. That said, I finally upgraded to a Jeep because I eventually got tired of being stressed out about climbing even the smallest hill that was covered in snow and ice.

Again, the core concept behind nearly everything I create is that we can all be autonomous, free-thinking beings capable of adapting to any situation so long as our minds are open to new possibilities. 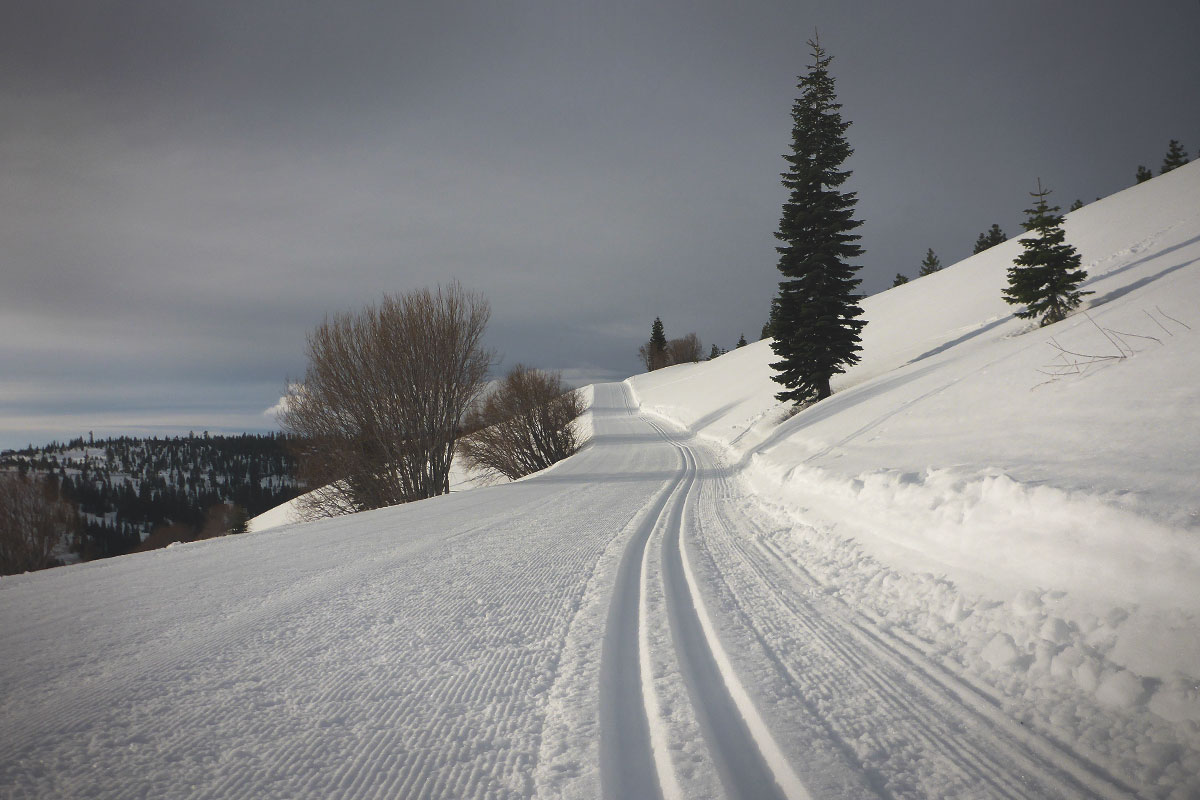 Cross-country skiing in the morning before a storm hit on February 2, 2020. © Jared Manninen

So the reason I produced the snowshoe video wasn’t to sell a brand or style of snowshoes. I was selling a way of life that included outdoor adventure, but not restricted by the belief that outdoor adventure should only look a certain way.

The point I was illustrating was that once you learned basic technique and understood how to use snowshoes, you could pretty much travel anywhere safely and confidently. But, although nearly all of those techniques I demonstrated could be implemented with traditional snowshoes, they’re still severely limited by the fact that they don’t have crampons.

So as much as I suffer from gear lust, deep down I understand that gear is just a set of tools. Gear is not something to be coveted. Maintain and take care of it so that it will last as long as possible. But, never lose sight of the fact that it serves us and not the other way around.

One size does not fit all.

I don’t believe there’s a “best” anything. There’s only what works. And what works is nearly always based on the individual and their experience, skills, and circumstances. So, the better your technique becomes the more you can accomplish with less. But eventually, your abilities will exceed the gear’s limitations and you’ll need to acquire a more appropriate tool for the job. 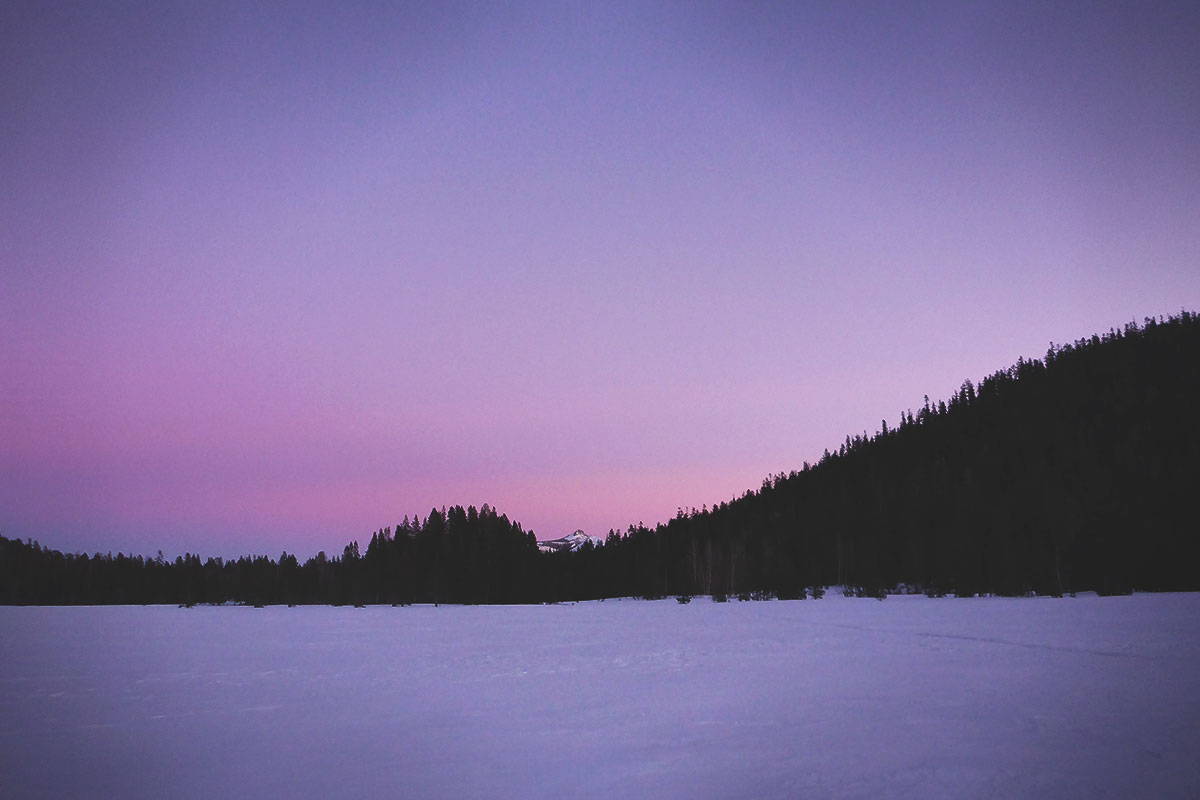 Cross-country skiing at Grass Lake on February 4, 2020, at dusk. Hawkins Peak is in the distance. © Jared Manninen

Before I close I just want to state on record that, in spite of my snarky comments above, I absolutely respect practitioners of bushcraft and pioneer skills and art. I hold in high esteem those who would carry the past forward. With so many advances in technology at such an accelerated rate, it’s easy to lose sight of where we come from and why we do the things we do.

Realistically, as a cross-country skiing instructor who promotes classic skiing over skate skiing, I’ve become an archivist who’s doing their part to prevent a fine art from being relegated to the annals of history.

Because I think classic skiing is a beautiful and universal language for traveling across snow. And, I can hear the guy reading this from the furthest corner of the internet asking, “Do people even still diagonal stride?”

I’ve been putting more time and effort into producing YouTube videos lately. The impetus has been due to an increased flurry of activity (more subscribers and comments) this winter. I’m basically just trying to capitalize on the momentum. That, and I love making these things. It’s always fun to shape and edit the raw footage into something coherent!

If you haven’t already, please subscribe to my channel. I’m trying to have my channel monetized (i.e. earn ad revenue) and need at least 1,000 subscribers (currently I’m at about 325).

Here’s a new article I wrote for Tahoe Trail Guide. As you can probably imagine, the above YouTube video about side-stepping and using the herringbone technique were produced in conjunction with this article. Enjoy! 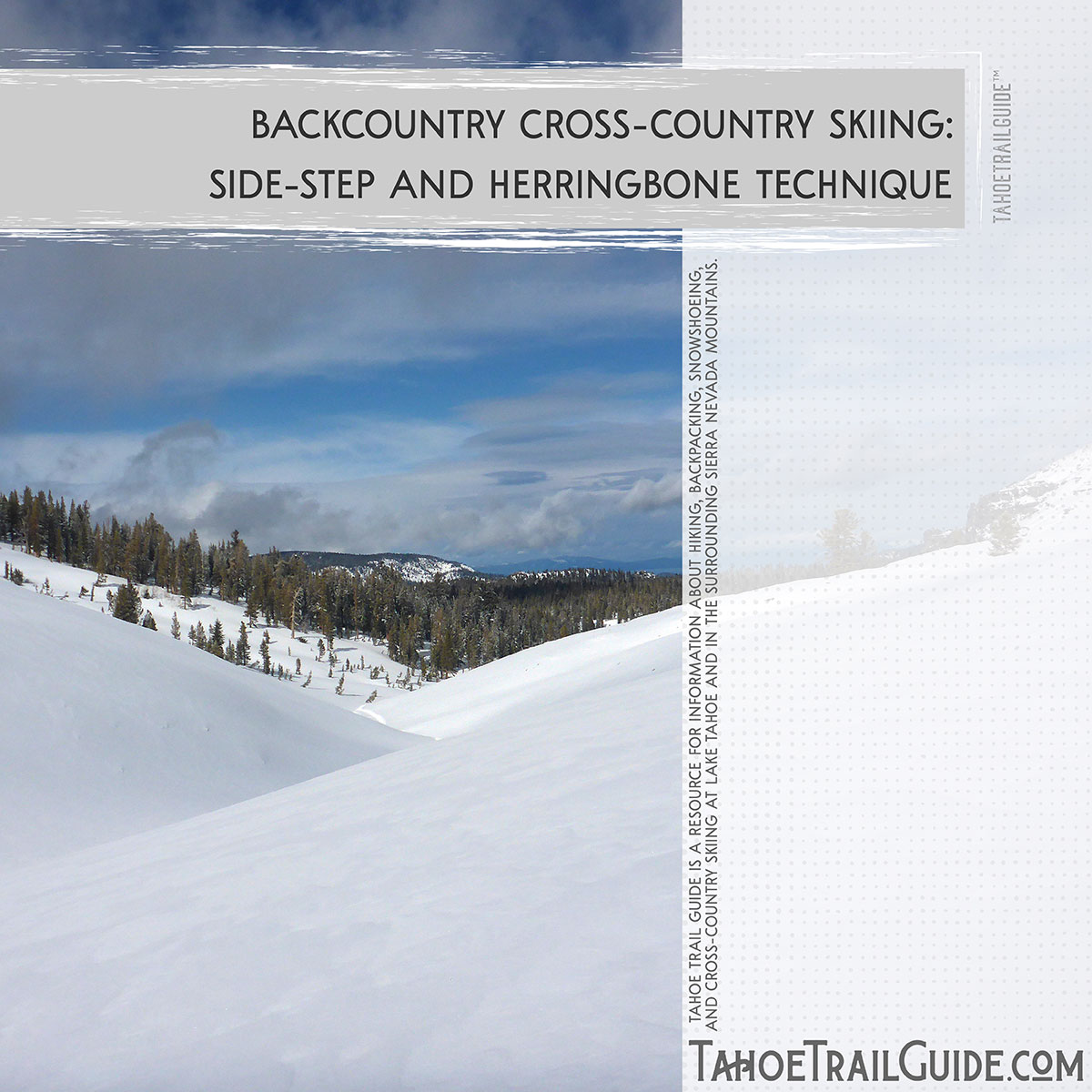