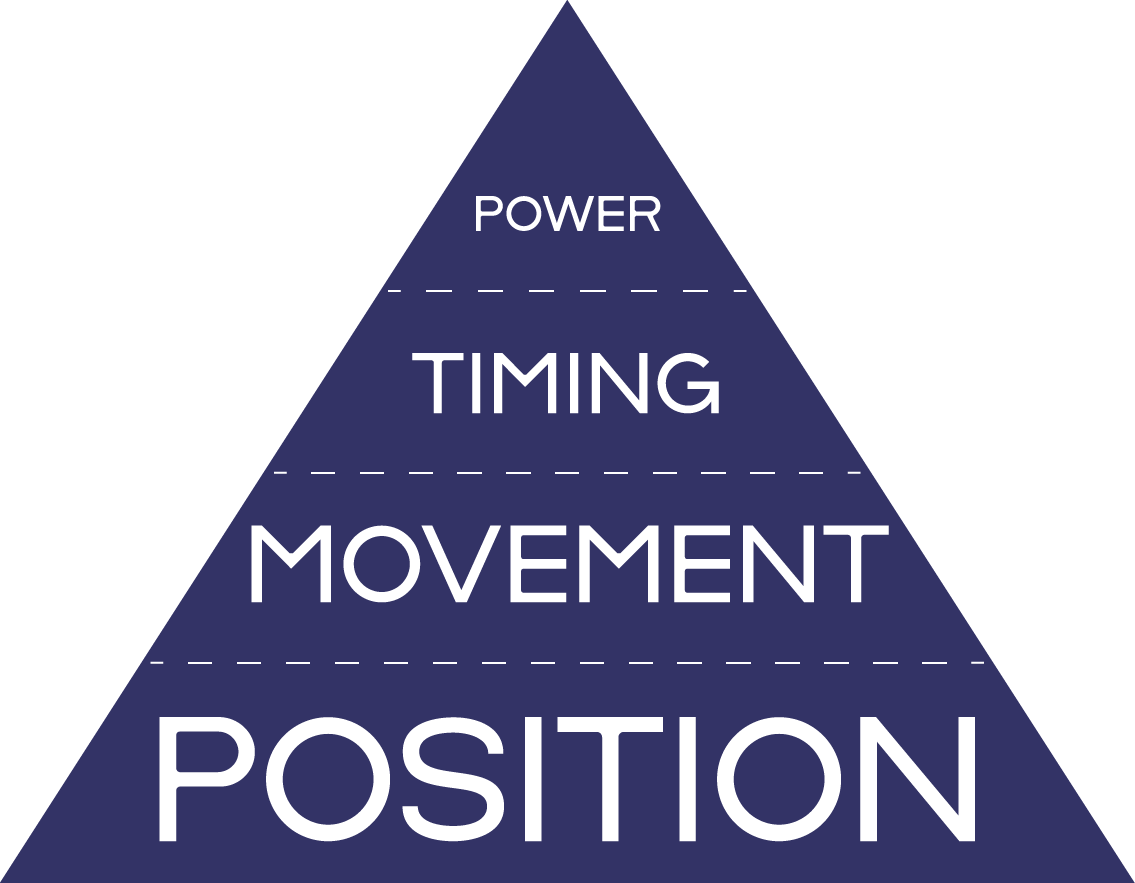 In my study of cross-country skiing (in pursuit of earning a basic teaching certificate), I recently looked closer at the “sports performance pyramid.” It became clear to me that this model for learning is also an effective approach to completing projects, building a career and, most importantly, living a fulfilling life. The idea behind putting into practice these steps is to build from the ground up.

Establishing your position is the first step to this learning and living process.

To make these concepts more universal, I’ve refined their descriptions into single words. For example, the original text for the base of the pyramid read “fundamental athletic body position.” For skiing, an athletic stance is key to maintaining one’s balance and it provides a position from which to properly initiate technique and return to once the technique has been executed. However, position is relevant. It doesn’t always look like … feet hip-width apart, joints slightly flexed, body weight resting on the balls of the feet …

Much like a basecamp from where you could launch shorter adventures, position is essentially a physical or mental place in which to begin and return. Position could be your home, belief system, or “center.” It could be you sitting still, focusing on your breath, and gathering your thoughts before and after speaking while being embroiled in a family argument. Position could also be your topic sentence, thesis, or life’s purpose. 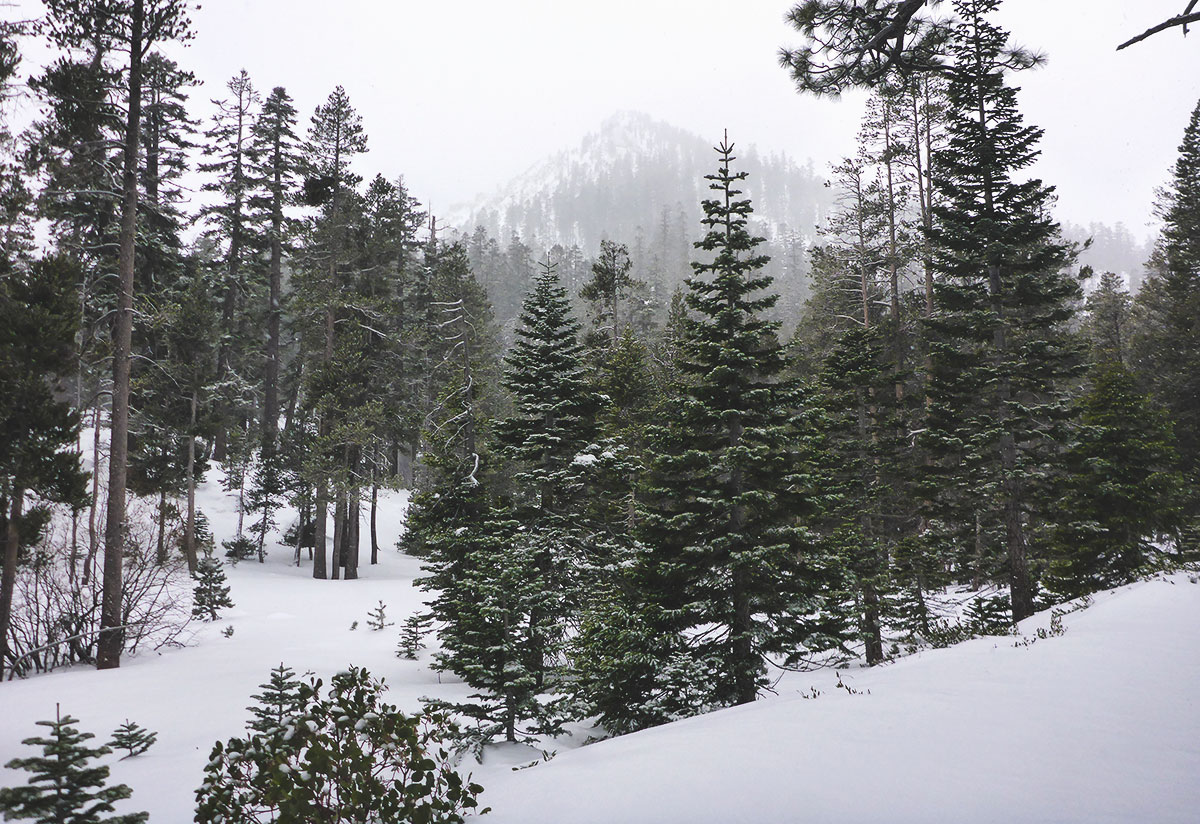 A gloriously overcast and snowy day on January 15, 2019. © Jared Manninen

The bottom line is that if you don’t understand (or have not yet established) your position, at best you’re only going to accomplish short-term goals throughout your life. I know this because it’s been one of the most defining aspects of my life. I’ve accomplished many things, but most of my goals never lasted more than a couple of years. And as I’ve grown older, the duration of time it’s taken me to complete things has grown shorter. At some point it felt as if I couldn’t stick with anything for longer than six months. For many years, I just didn’t have a clear vision of who I wanted to be or what I wanted to ultimately achieve.

Metaphorically speaking, position is established through self-examination, determining what it is you want out of life, and then declaring “this is who I am.” You can effectively move from and return to that place, vision, or image in your mind.

As essential as establishing your position is, though, you can’t stand still forever. Movement is inevitable. 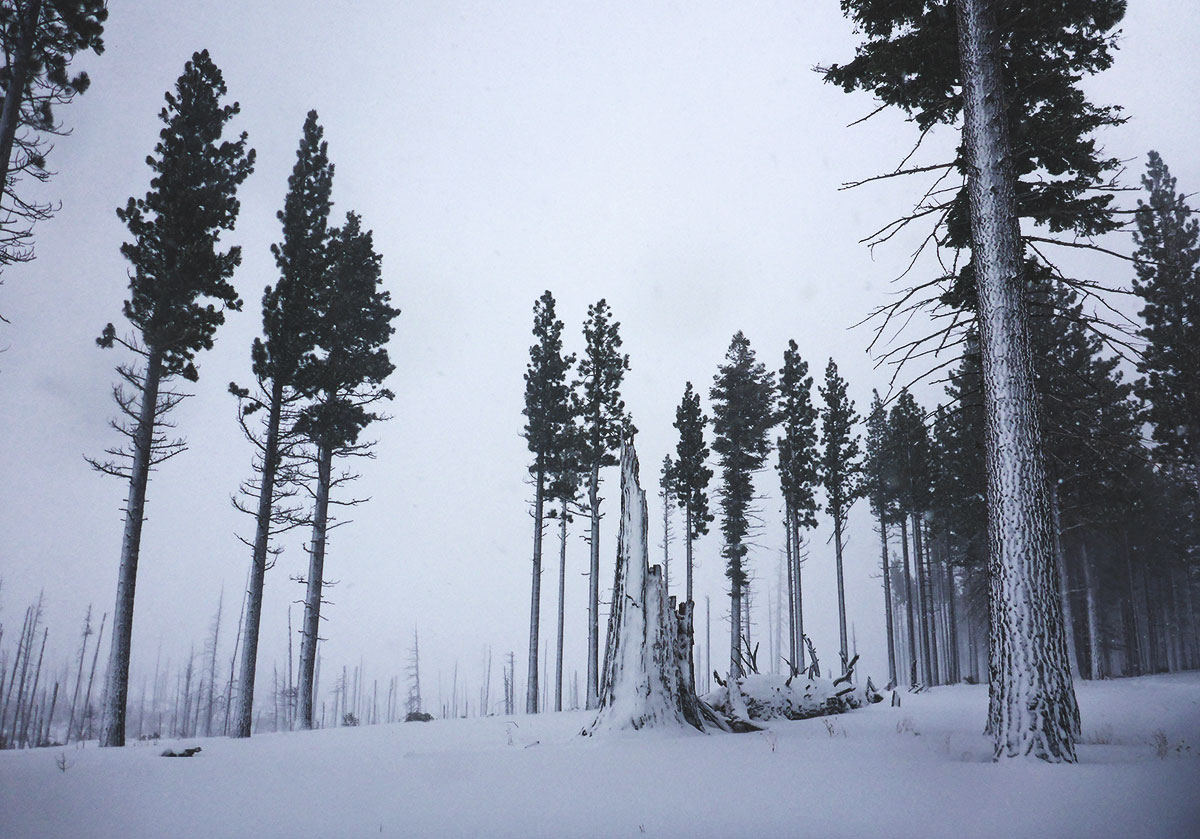 Venturing into the backyard on January 17, 2019, which was quite the blustery day. © Jared Manninen

From an established position, the next step up the pyramid is to learn and practice basic movement.

Because cross-country ski technique, when done properly, involves many coordinated elements you’ll first need to work on the basics. So rather than attempting to learn everything at once, spend time working on various aspects of technique in isolation. This is standard with any sport or activity and usually manifests as a series of drills designed to teach you basic elements of movement. 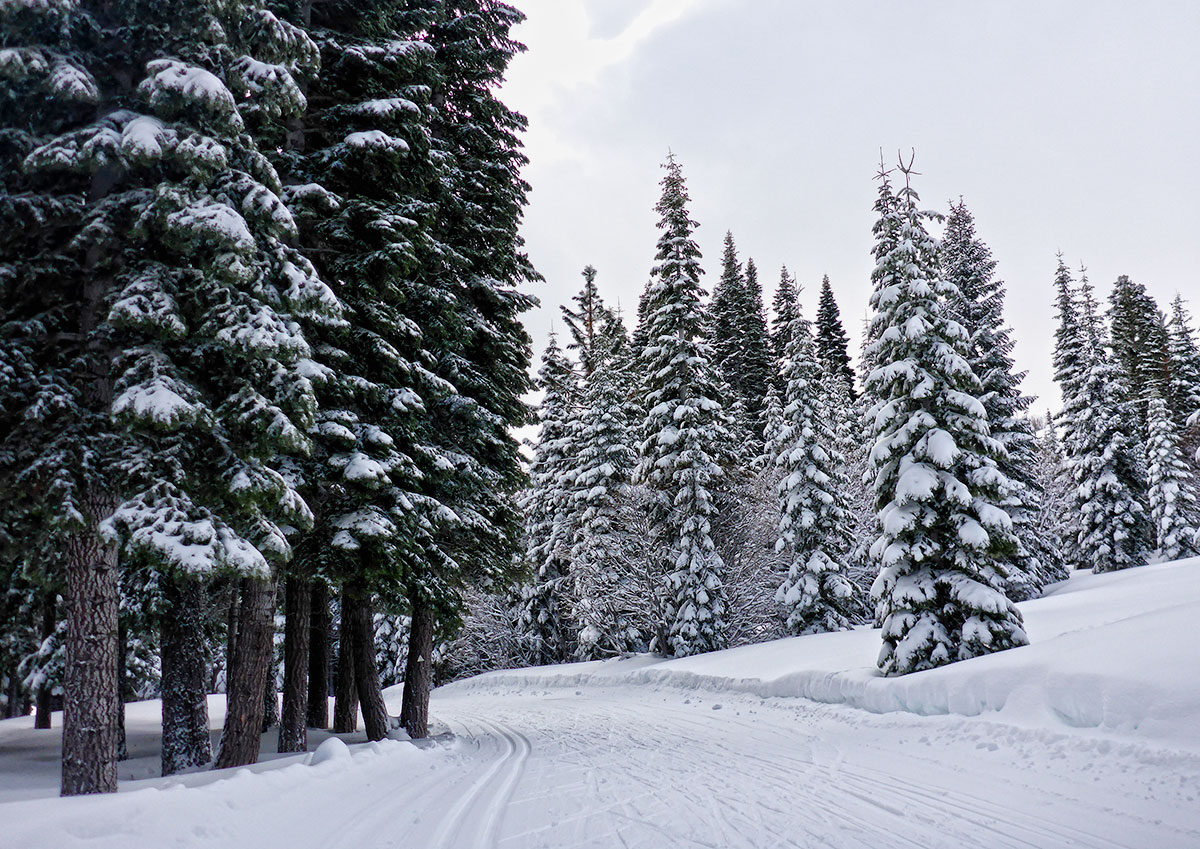 In terms of metaphor, this is the process of building productive habits into your routine and learning appropriate skills that will contribute toward the overall success of your vision. These techniques should directly apply to what it is that you’re trying to accomplish. They should be introduced progressively and in a way that isn’t overwhelming.

Like many people, I’ve found myself more often than I’d like to admit spending too much time and effort learning abstract skills, suffering under enormous workloads at dead-end jobs, or maintaining failing relationships knowing damn well they were never meant to last. Experience serves to shape our lives and make us well-rounded people. However, don’t try to offer 3,000 unique menu items at your new restaurant while hosting a Mariachi band that performs their music on a flaming carousel during your first week of business. Start small and keep things simple. Work on basic skills, techniques, and processes and become proficient in their execution. 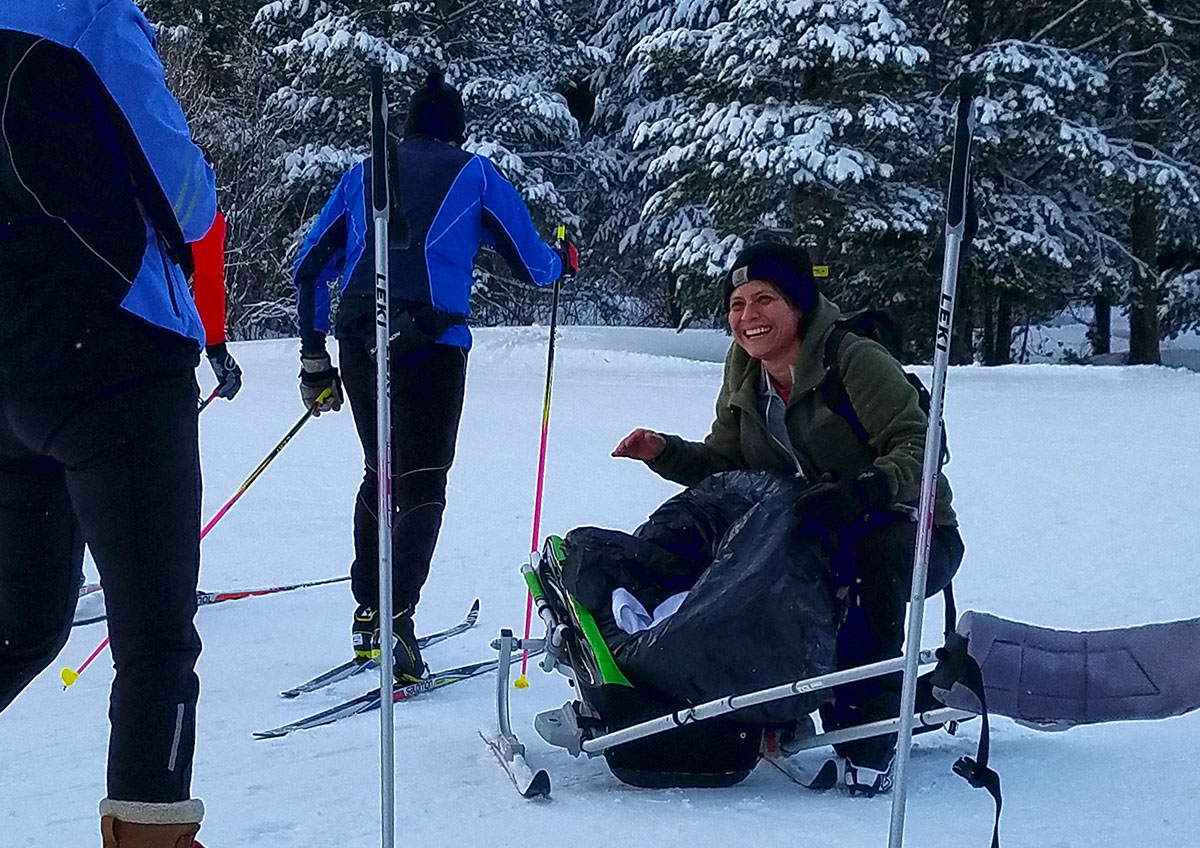 I had the opportunity to meet Silvia Vazquez-Lavado on January 21, 2019. She is the first Peruvian woman to climb the world’s Seven Summits. On this day she was performing research for her upcoming adventure of skiing to the North Pole. She was pulling a tire around in a chariot to see what the additional weight felt like. © Jared Manninen

Once you’ve gained a general level of mastery over basic movement, embrace the art of timing.

Timing is the act of coordinating elements into an integrated whole that presents seamless transitions from one position to another. To a novice, an advanced cross-country skier’s movement will appear to be a blur as they race down the trail. However, there is logic and process behind the skier’s efforts. Some of their body movements will occur simultaneously while others take place in a certain sequence. The skier has learned through diligent practice the correct timing of these elements and actions.

Keep in mind, though, that in your study and practice of timing you don’t need to perform every action at the speed of light. In fact, speed is the result of proper timing not the other way around. Slow is smooth and smooth is fast are words to live by when coordinating complex movement, which essentially is nothing more than a series of basic movements linked together. 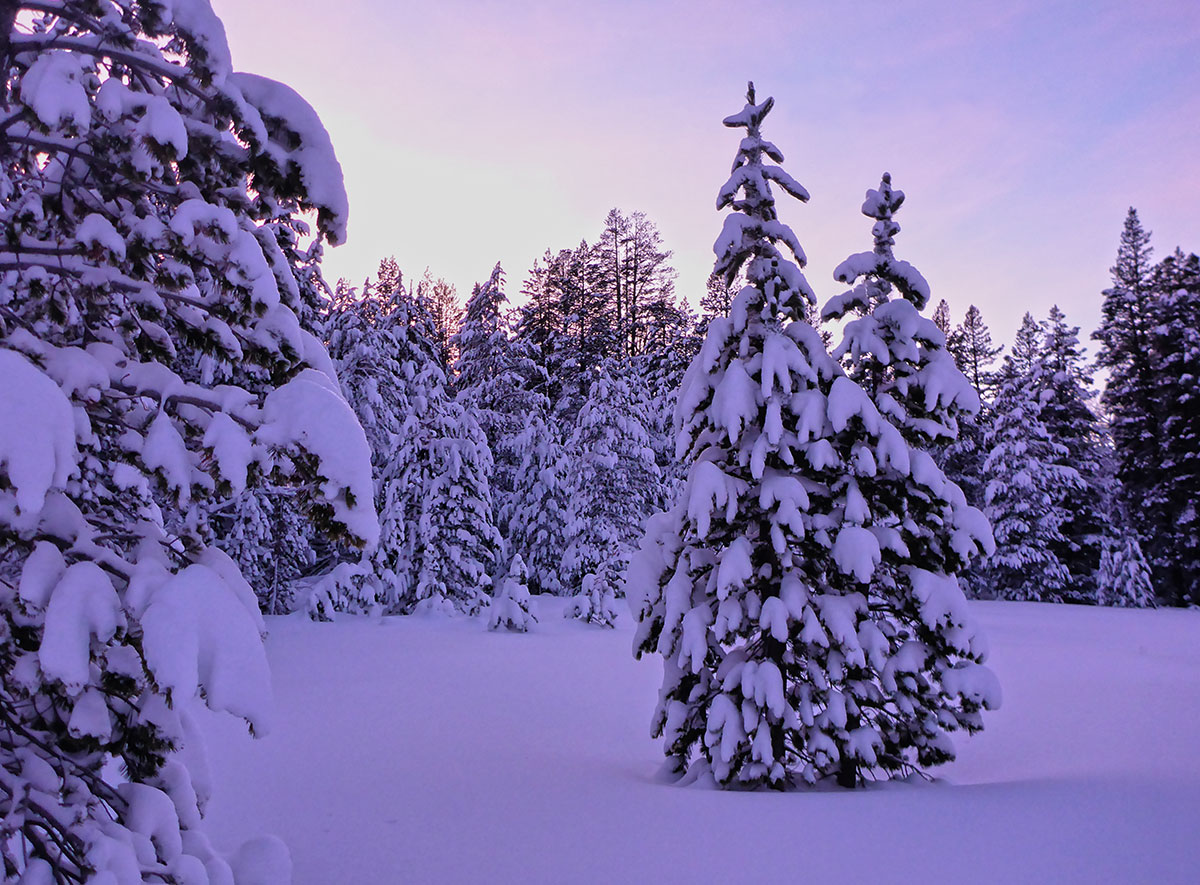 Whenever I describe to people the Tahoe Trail Guide website, my jobs, and the other related activities in which I participate, I’m usually offered a dozen new ideas. I totally appreciate this feedback. However, I always have to remind myself that I am a one-person operation and have limited time. So, I must choose wisely when implementing new ideas or learning new skills, lest I fall down a rabbit hole (as I’m prone to do). But because I’m 44 years old and not 24, I don’t suffer from FOMO (fear of missing out). I understand that everything happens at the right time, in the right place, and in the right sequence.

Yesterday, for example, I met a person that I’ve wanted to meet for the past three or four years. This person is a prominent individual who’s been in the cross-country ski industry for decades. At any point during the last three years I could’ve just drove to their place of business and introduced myself. Although, I’m not a fan of cold calling unless it’s absolutely necessary. And, in this situation, it wasn’t absolutely necessary. Mostly I just like to get to know people in the industry because those connections are what enable opportunities to manifest. So, believe it or not, the way I met this person was through another individual who’s been on my list of people to meet for the past year.

This second person is also an individual who’s been in the local cross-country ski industry for decades. Three or four weeks ago we met at, of all places, the grocery store. We communicated through email until this week when we finally had the chance to ski together. After yesterday’s ski session, the second person provided me with an introduction to the first person. All things considered, these connections probably wouldn’t have occurred as naturally and organically three or four years ago. But by establishing my position and developing my skills and connections within the local cross-country skiing community, I now know two more people who have way more experience than I do and can offer advice and possibly act as mentors or become friends. 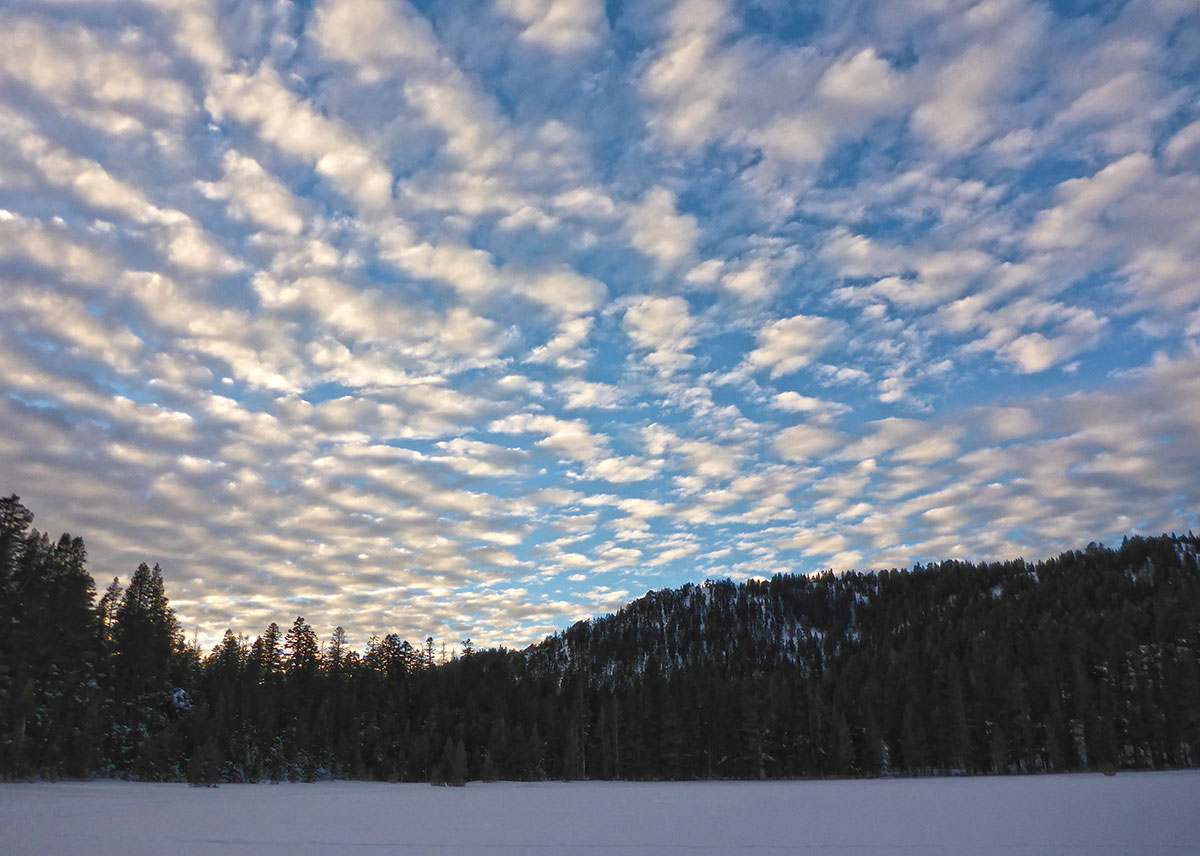 Another evening session on cross-country skis not too far from home on January 23, 2019. © Jared Manninen

The final step is for you to apply power to your movement.

You’ve created a stable position or platform, you’ve mastered basic movement, and you’ve learned to express that movement as technique through the application of proper timing. Now, you can crank it up to 11. Just remember that you’re not necessarily doing anything different. You’re mostly just picking up the pace and flexing a little more muscle. Upon reaching this last tier of the pyramid, you’re not only able to see opportunity but you can also capitalize on it. You have systems in place to address more work and new ideas and opportunities.

I imagine this last phase is where a lot of people fail in their pursuits. The problem with applying power too early in the learning and living process is that it can mask poor and inefficient technique. A person then mistakenly believes they’re more skilled than what they truly are at what they’re trying to accomplish. They either don’t have the money, manpower, or the skills necessary to handle a bigger workload or new opportunities (so they don’t take them) or they collapse under the weight of their own success (because they achieved it too quickly or through artificial means).

But if you’ve paced yourself throughout the process and built your operation from the ground up, you should experience a level of confidence that’s not present in the other three stages because you’ve set those tracks and are now heading down them at full speed. 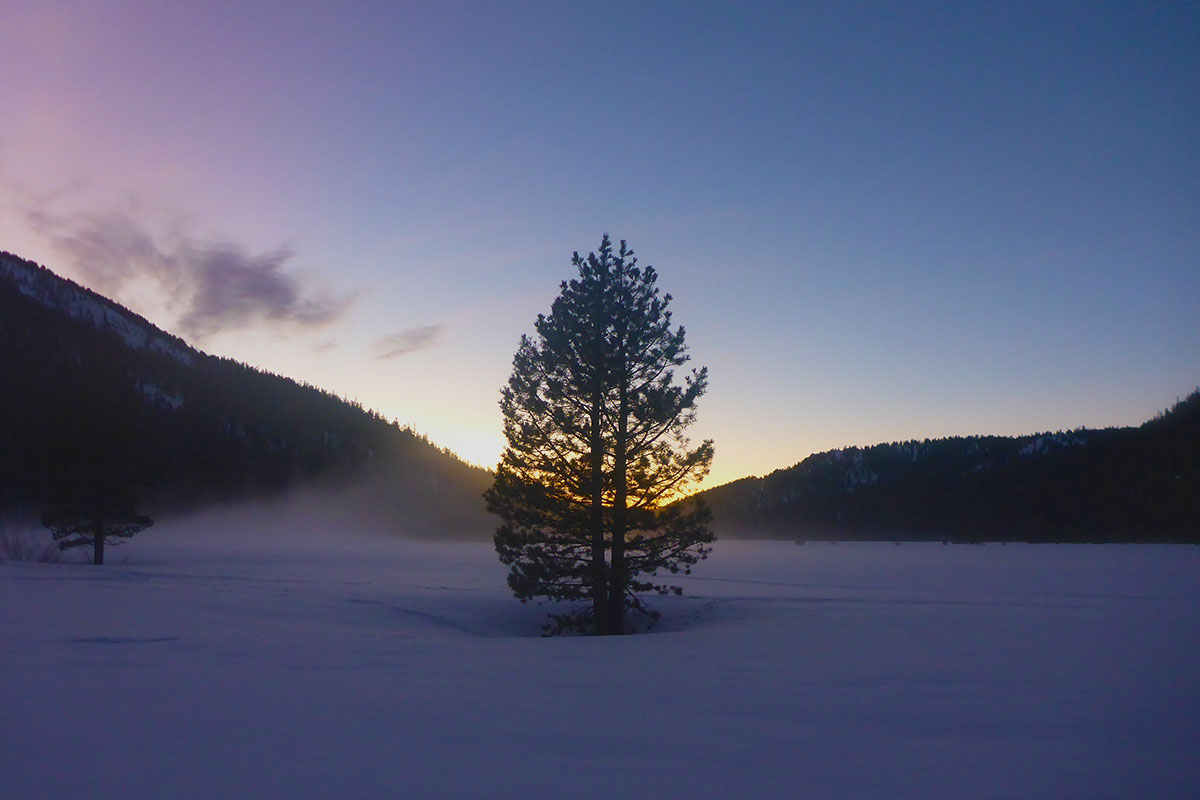 I wrote articles about three of my favorite locations to cross-country ski for Tahoe Trail Guide. As part of the building and refining process I occasionally mine old work in order to create a more comprehensive and specific website. For example, a relatively easy hiking trail doesn’t necessarily make for an easy cross-country ski trail. But rather than including all of the information on one long page, I believe it’s better to separate it based on summer or winter use. 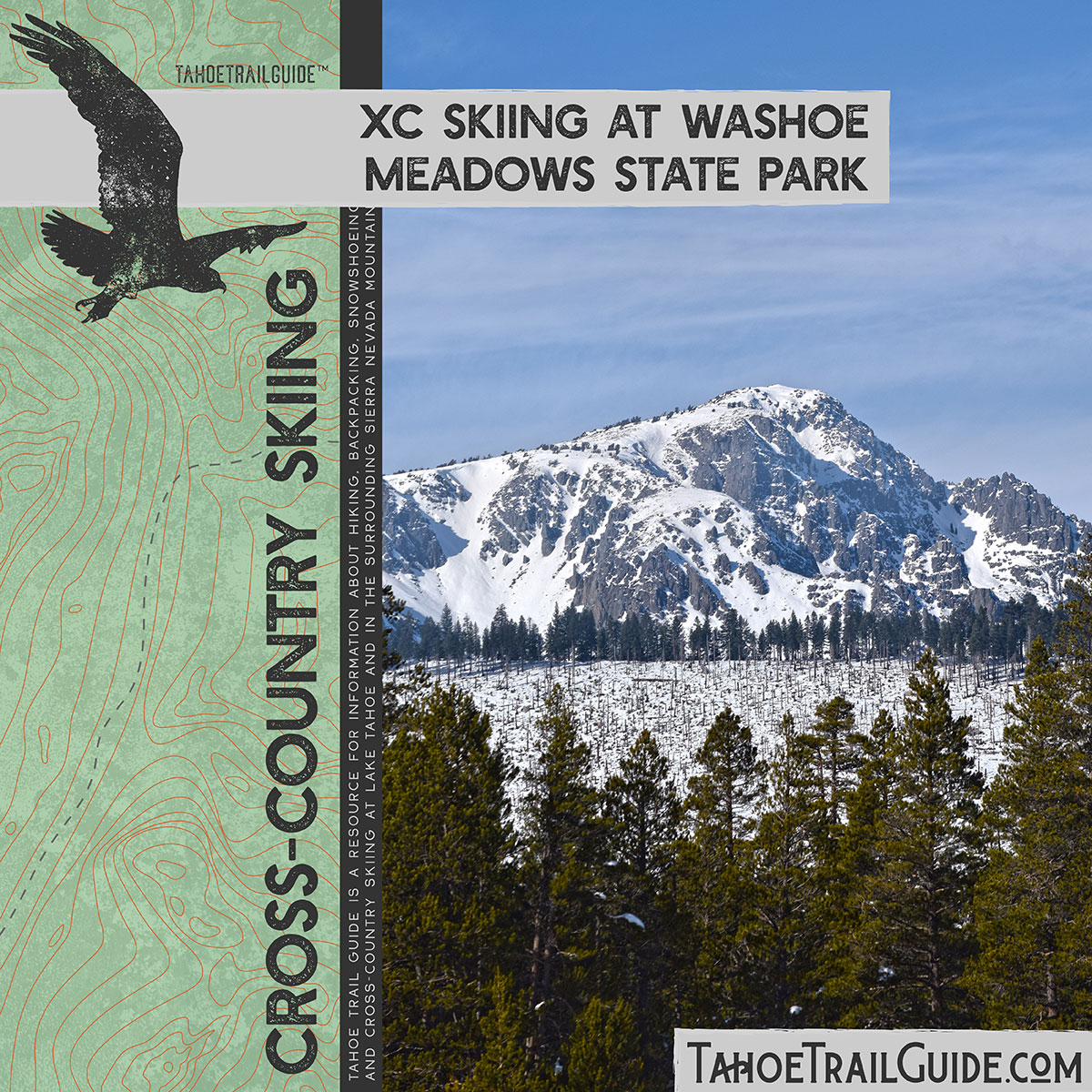 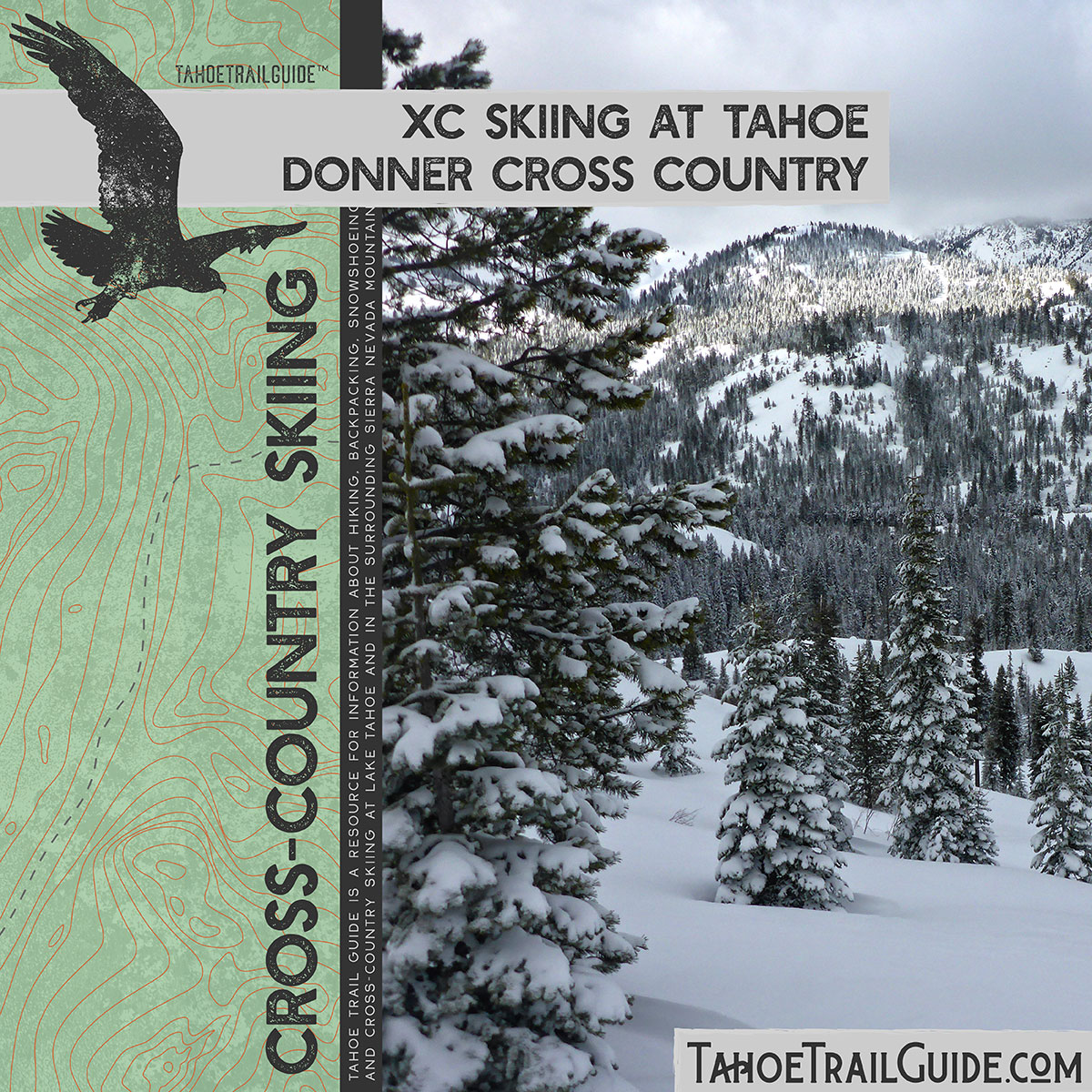 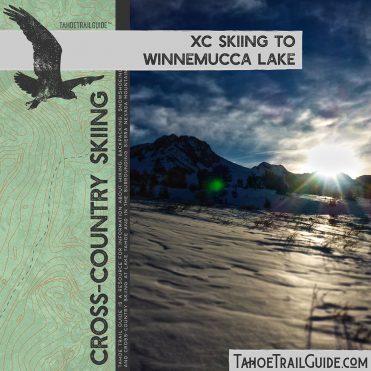