Like most avid and rabid readers I, too, have a stack of books about a mile high that I’m working my way through as time permits. I admit that most of what I read falls into the realm of comic books and graphic novels. However, my interests are diverse and that pile of mine ranges from kids’ classics to outdoor reference books to books about history.

The story I read most recently falls into the latter category. Although you could also call it a western horror. There were a number of reasons why I wanted to read it now, but the most compelling was the anticipation of winter. I simply couldn’t think of a better time of the year at which to read an historical account of the Donner Party. For all intents and purposes, November (1846) was the month in which they officially became trapped at Truckee Lake (now called Donner Lake). 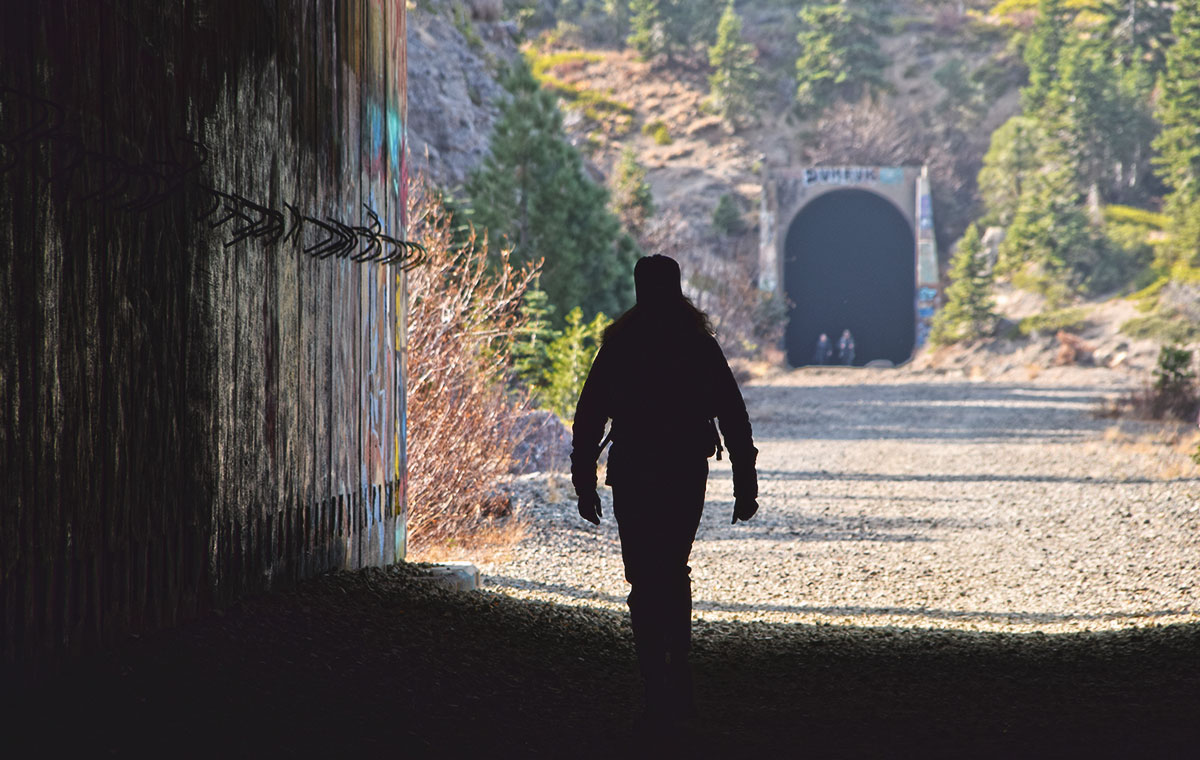 Pixie emerging from one of the former railroad tunnels on Donner Summit on November 10, 2018. © Jared Manninen

There are myriad angles from which to view and interpret their tragedy. For now, however, I’ll spare you the morbid and gruesome details of their ordeal since Halloween has already come and gone. Instead, what I found most striking about their story, particularly as I’m forced (due to the lacking requisite snow conditions) to wait for work at the cross-country ski center to begin in earnest, is that it can be boiled down to one simple yet relatable theme – failed dreams.

As much as I cherish the time off between my seasonal jobs, I’d be lying if I said I didn’t feel anxious and a little desperate as I watch my bank account dwindle. That said, it’s not my intention to induce feelings of dread or depression during this otherwise festive season. But while I read their story I saw the parallels between their overall situation and anyone who’s ever had a dream or vision for their life that’s not yet manifested into a reality (i.e. me). 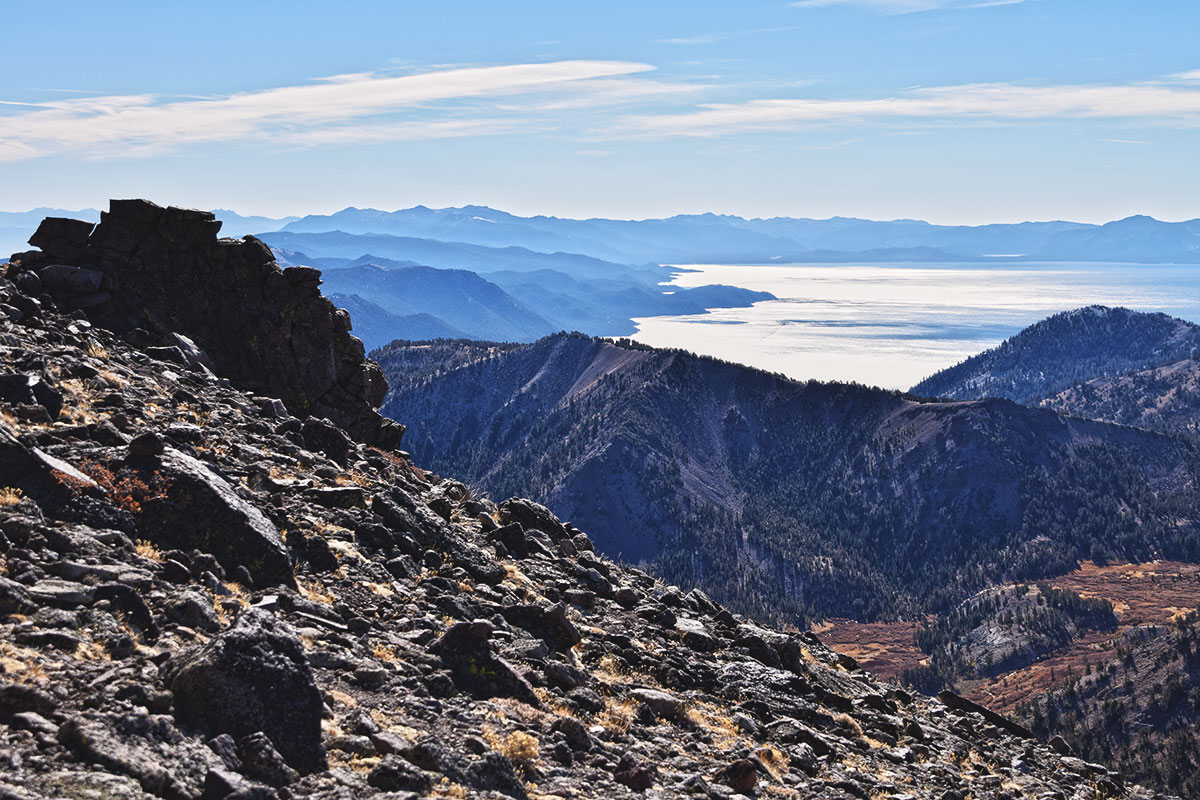 Looking south at Lake Tahoe from a point just below the summit of Mount Rose on November 11, 2018. © Jared Manninen

And as I read and researched further, what I found nearly as shocking as the cannibalism that eventually occurred that winter was the fact that the families in the Donner Party were just normal citizens. Their story was that of the everyman. Any person who’s ever gambled on the grass being greener on the other side can relate to their story. Except, of course, that the Donner Party’s bad luck and losses were in the absolute extreme.

Many families in the Donner Party owned farms or small businesses, so they were moderately successful. Many were a part of an extended family, so they had a network of support. In fact, I don’t believe any members of the Donner Party were actually fleeing persecution of any kind or were so desperate or destitute that they needed to escape at all costs. Just consider the story of the 60+ year old gentleman named Hardcoop. He was one of the first members of the party to die. He simply wanted to see America and planned to, upon returning from California, sell his farm in Ohio then move back to Belgium to spend his remaining years near his adult children. He was literally treating the experience much like a person today would when taking a vacation cruise. 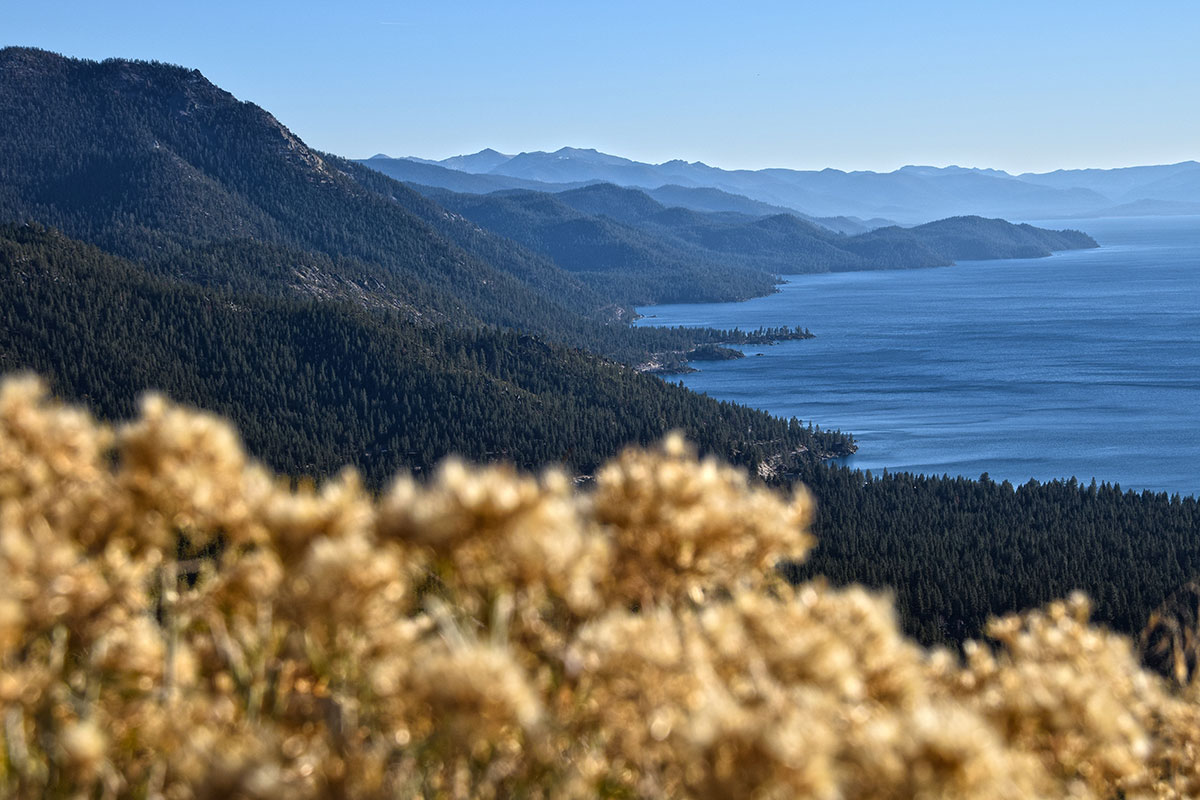 Another view looking south along the east shore of Lake Tahoe on November 11, 2018. This vantage point was much lower in elevation than the summit of Mount Rose which is why the view is a bit less atmospheric. © Jared Manninen

Then to add insult to injury (and death), despite all the challenges the Donner Party overcame to reach Truckee Lake and come within 100 miles of their final destination, they missed their window of opportunity to cross the last major hurdle by one or two days! Even then, they really only needed to travel about 10 more miles in order to reach safety on the other side of that fateful mountainous pass through the Sierra Nevada. But the snow was relentless and would not abide them journeying any further than Truckee Lake, at least not by wagon or beast of burden. So, this journey of over six months and thousands of miles involving an emigrant party of over 80 people was rendered a failure by 10 miles and 24 hours.

The Donner Party were not the only emigrants to suffer loss in pursuit of a “better” life, but their story is the most notable because their circumstances were so extreme. Although half of the Donner Party managed to survive the winter of 1846/47 and reach Sutter’s Fort (present-day Sacramento), the sacrifice they made for their dream was immeasurable. 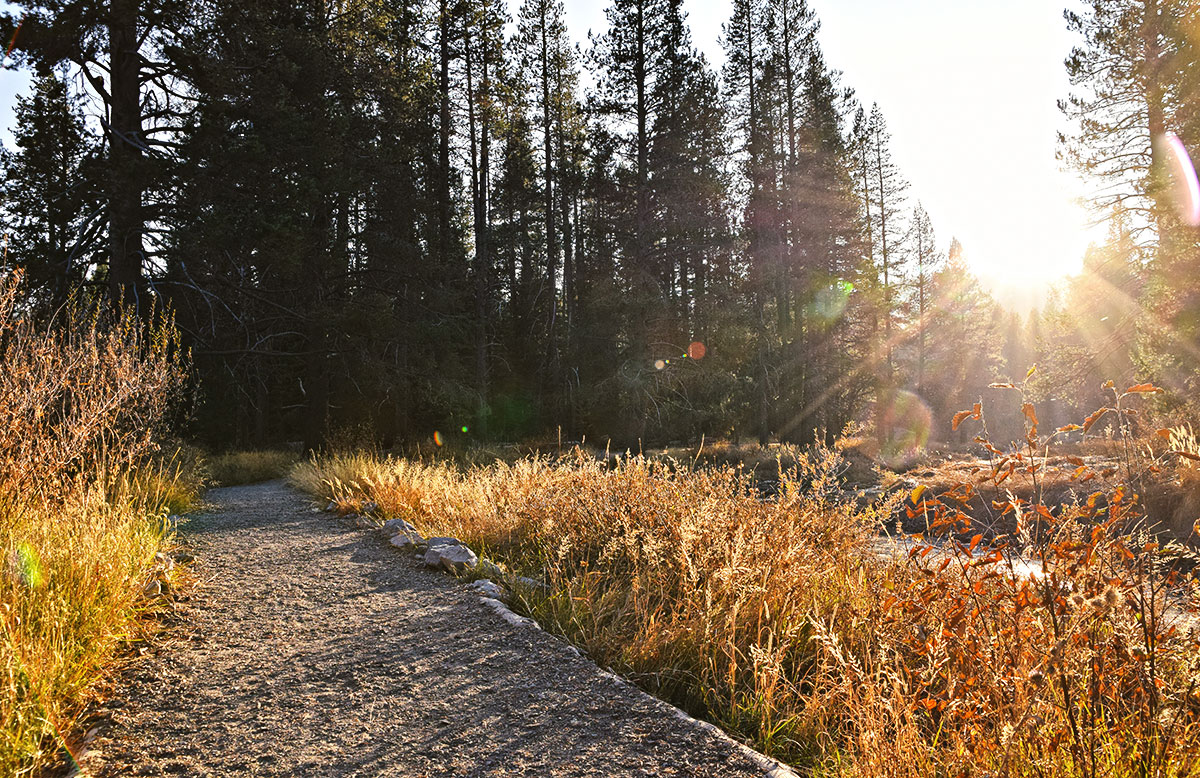 The sun setting on Donner Memorial State Park on November 16, 2018. This location is near the museum and a very short distance from Murphy Rock, which was one of the sites near Donner Lake where some of the families of the Donner Party constructed a shelter to protect themselves from the harsh winter of 1846/47. © Jared Manninen

In hindsight many people have questioned various aspects of the story. However, nearly all criticism fails to pass muster because the expedition was destined to fail from the moment they humored the idea of taking the Hasting’s Cutoff. The unfortunate truth is that the Donner Party was simply out of their league due to poor planning, a lack of leadership, being ill-equipped for the journey, and suffering a huge dose of bad luck. The only choice that could’ve prevented their misfortune was to avoid taking the Hasting’s Cutoff, but they were operating on what they believed to be fact in spite of being sold a lie (that the Hasting’s Cutoff was actually a shortcut).

But how could they know any of that considering how many other emigrants traveled west before them? How could they ever imagine that by pursuing something better for themselves was ultimately going to lead to them becoming embroiled in horrors unimaginable just to stay alive? Challenges are inherent when forging a new path, so at what point in your pursuit of a dream do you cut your losses for the sake of comfort or, more importantly, survival? 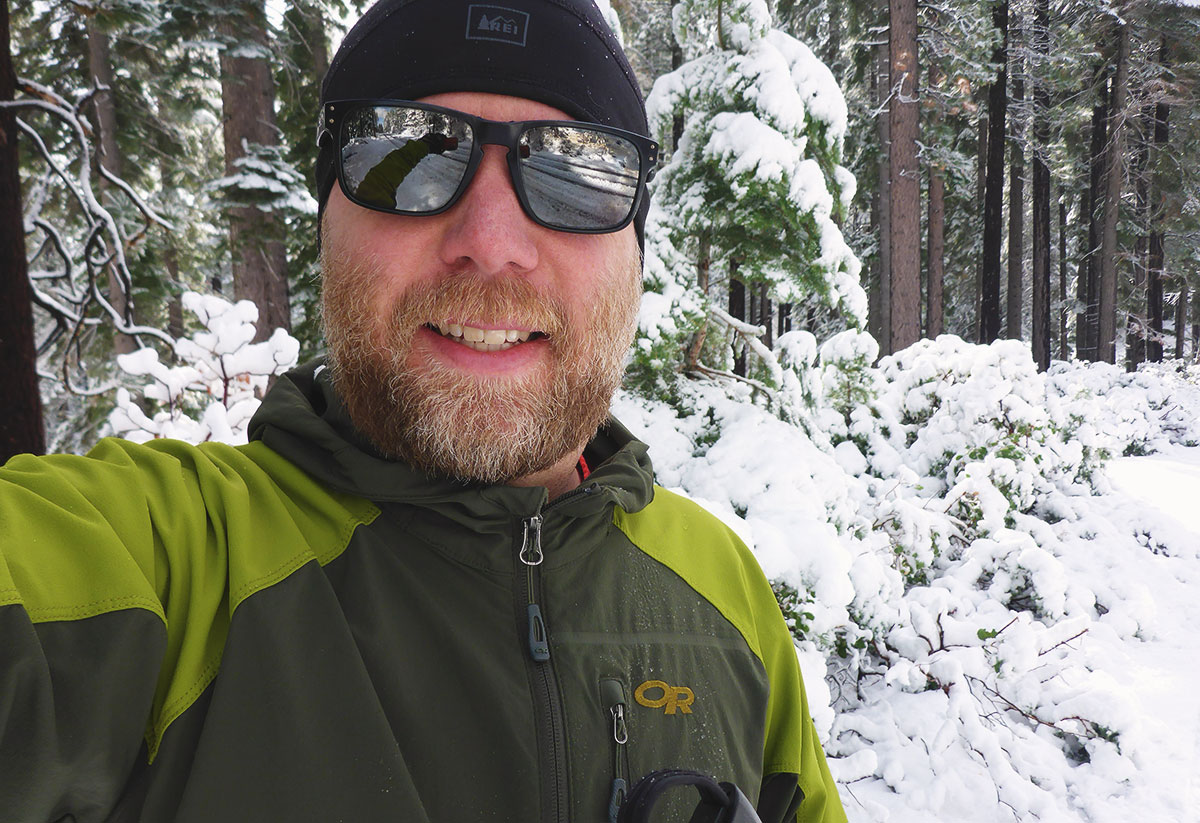 We were gifted snow on Thanksgiving, so I took the opportunity to cross-country ski in it while it lasted. © Jared Manninen

As I continue to dig deeper into Donner Party lore, I can’t help but wonder whether or not I’ll also lose everything along the way. But progress can be slow and if we indulged our fears and avoided setbacks and rough patches, nothing great would ever come about in this world. So the question I ask is how far is too far when gambling everything on a dream? But then again, doesn’t that gamble constitute the very essence of the dream?

Regardless of the risks involved, I do find it interesting that the place in which the dreams of many members of the Donner Party died happens to be nearly the exact location where mine feel like they’re just beginning. 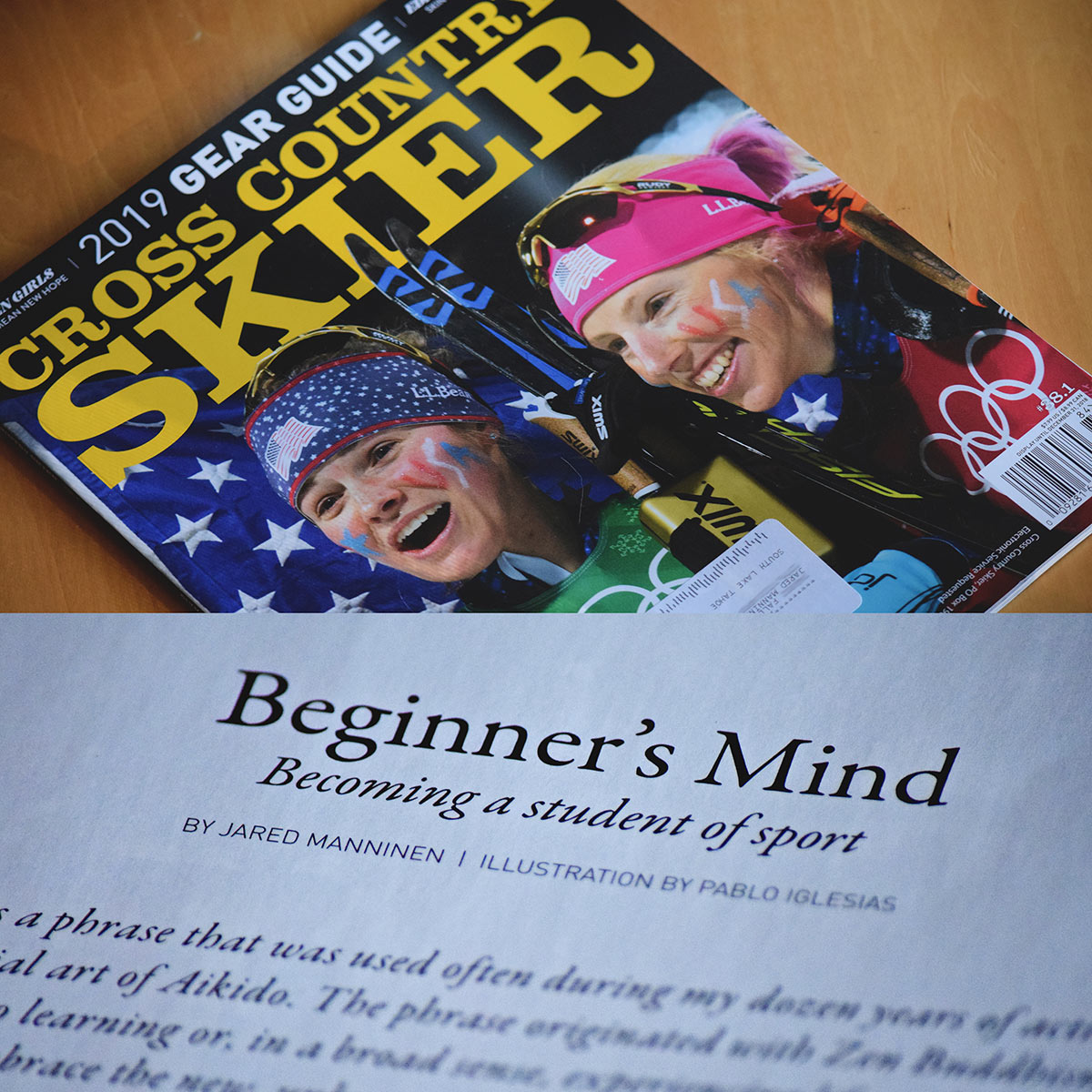 My reader essay was selected for print in the Fall 2018 issue (#38.1) of Cross Country Skier magazine. Click the image to order the magazine.

Since it wasn’t until Thanksgiving weekend that we received our first real snowstorm of the season, I’ve had the opportunity to continue logging some late season hikes. Below are three of the bigger hikes I completed in November. And since my job on the north shore of Lake Tahoe hasn’t truly begun, but I’m still up there more often than during the summer, I spent a recent weekend performing some in-depth research on the Donner Party and the Chinese emigrants who formed the workforce that built the railroad tunnels on Donner Pass (for the transcontinental railroad). Once I gain a more thorough understanding of both subjects, I’ll write articles about them. Not all regions and hiking areas at Lake Tahoe have such specific and rich history, but many of them do so in those situations I’d like to incorporate the local Tahoe history that’s associated with the areas. I find that knowing a little more about where I’m hiking and exploring adds an entirely new layer of context to the experience. 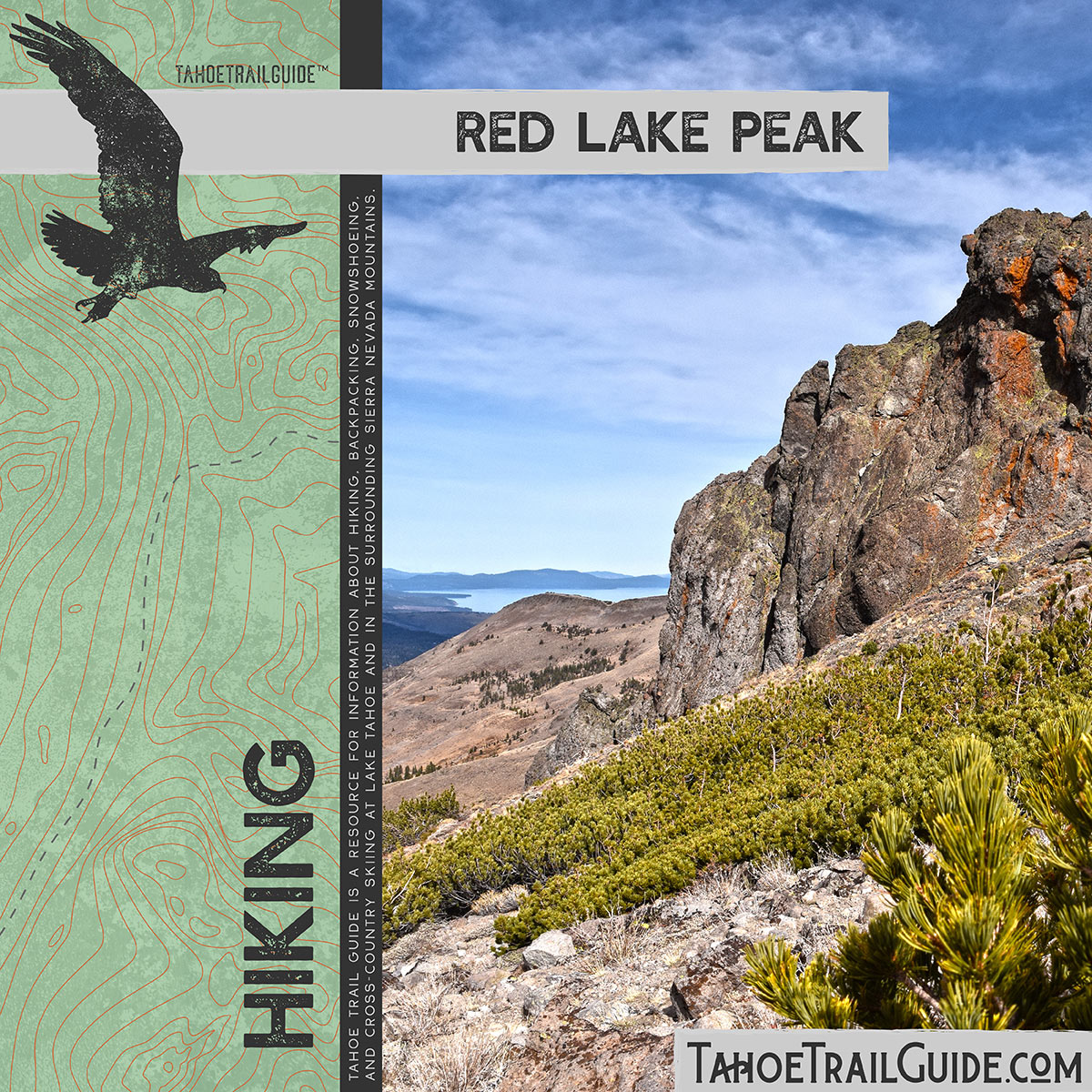 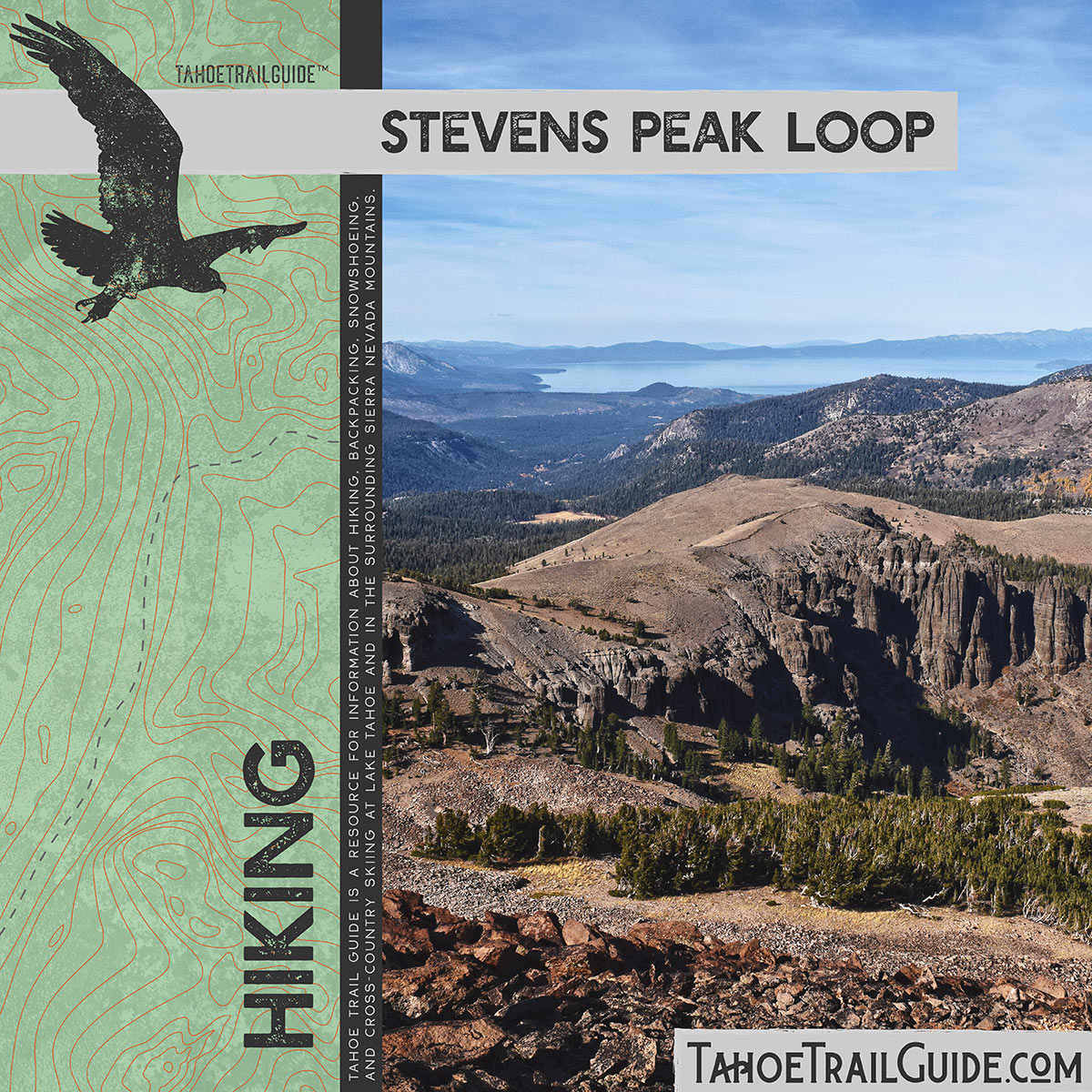 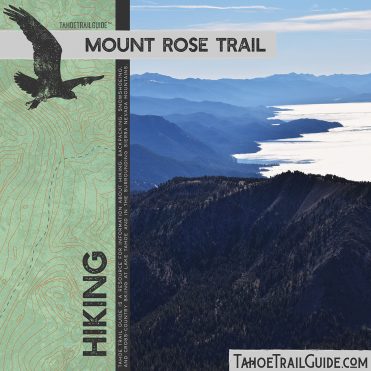 Below are some of my simple greeting cards for the holidays. I’ve uploaded them to my RedBubble account, so they’re available for purchase along with a bunch of my other artwork and designs. 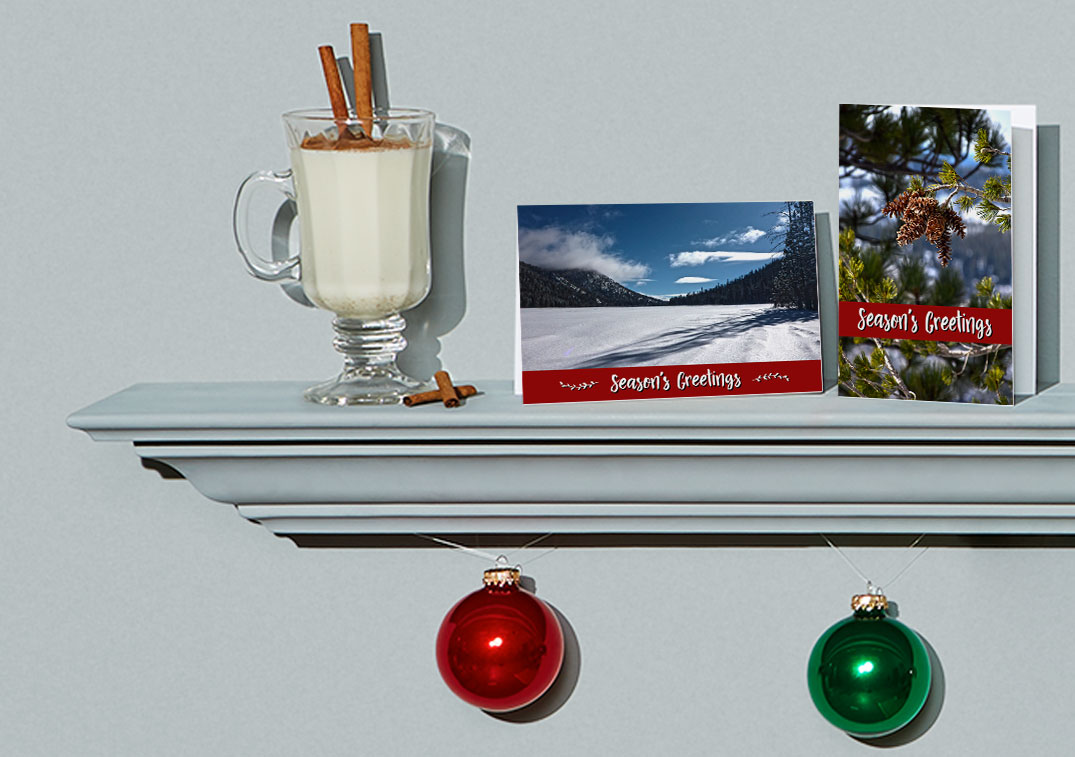 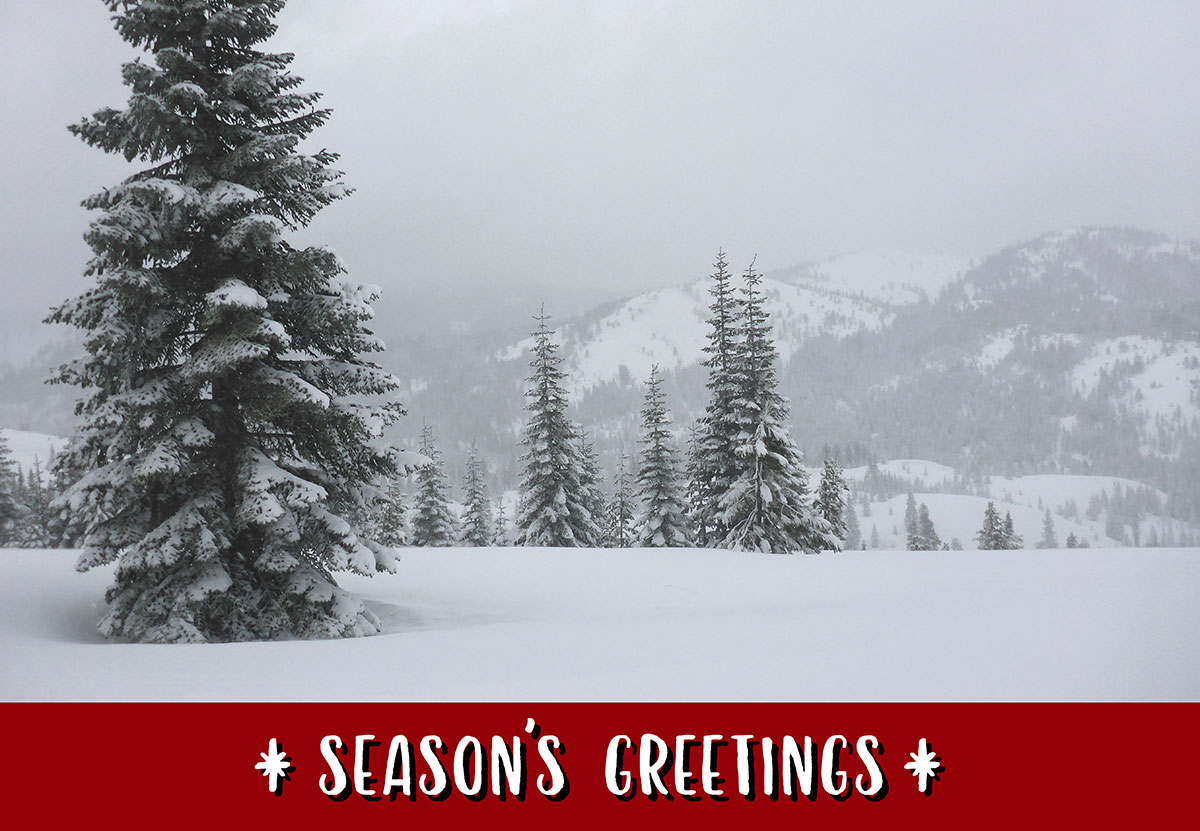 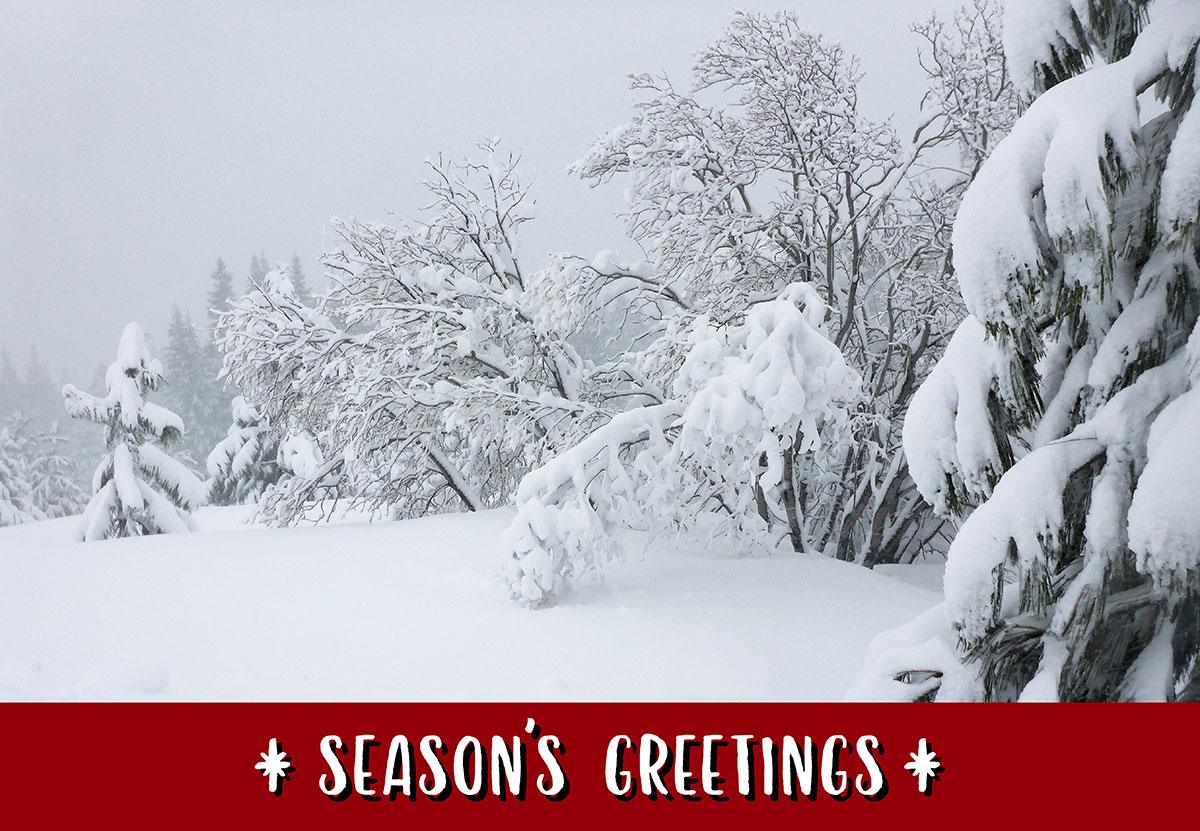 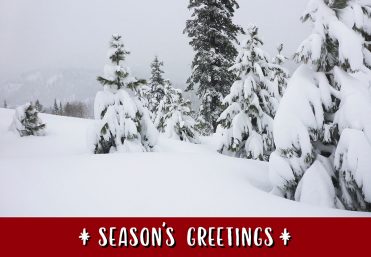 Here are some of the pages I colored (with colored pencils) last month from my coloring book, Color the Tahoe Rim Trail. I decided to color some of the hikers I met this time around. If you’re looking for a fun gift for the holidays, I have copies for sale or you can purchase directly from Amazon.

Click an image to view a larger version of it. 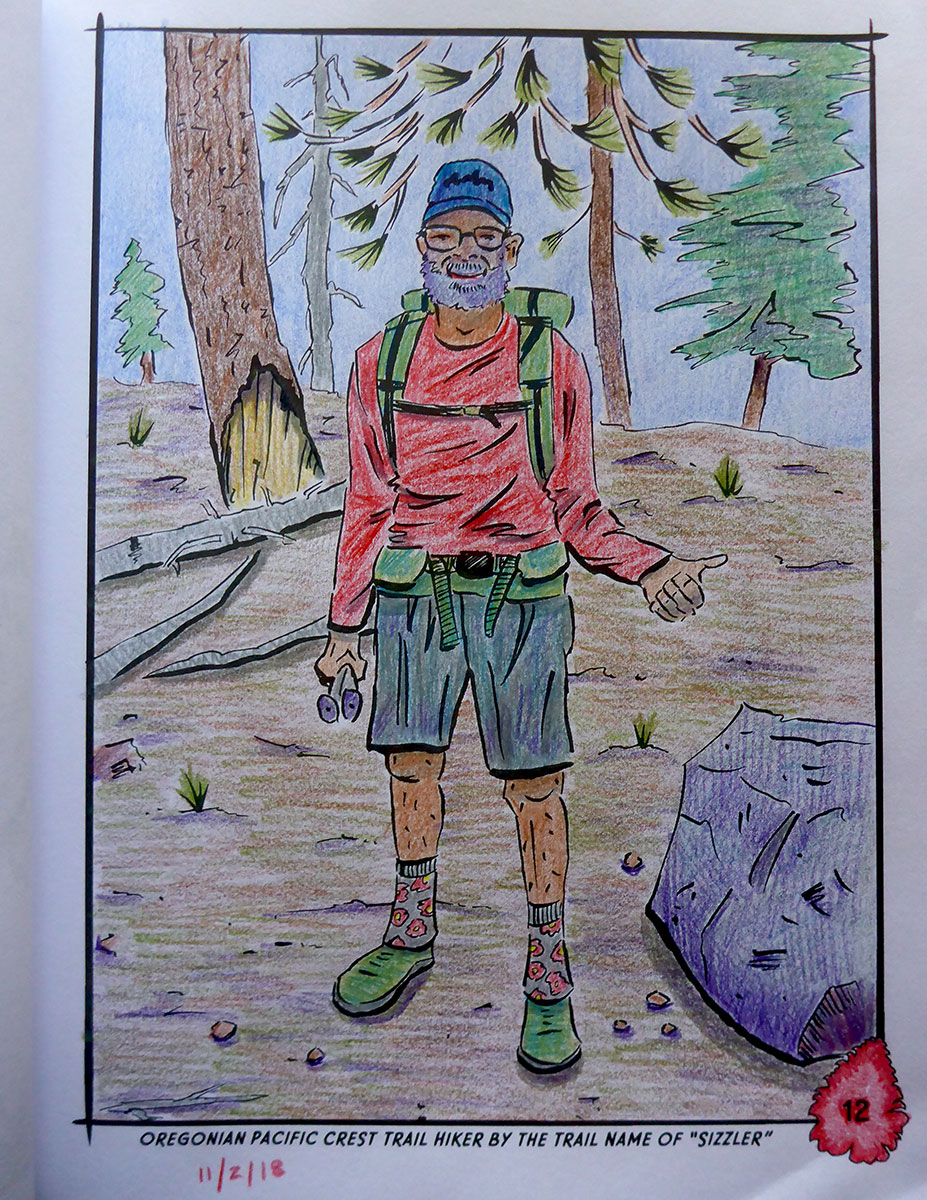 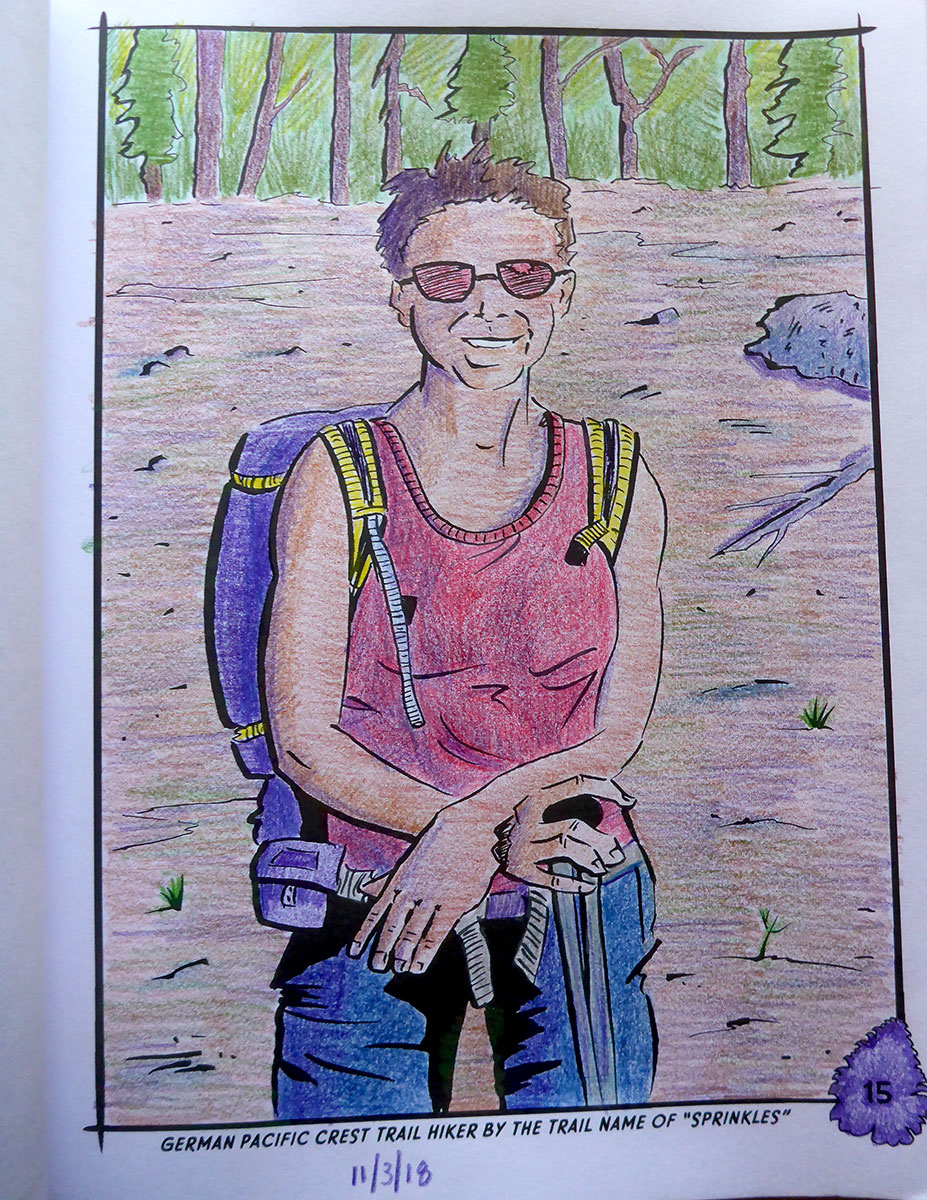 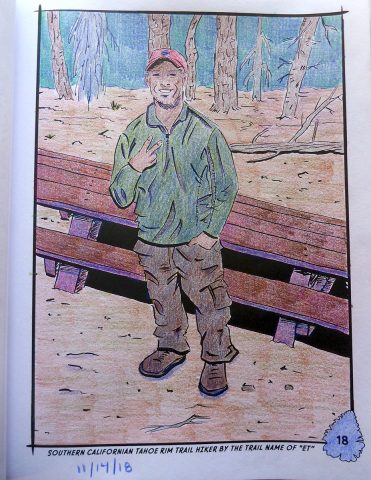