Click to Order Via PayPal Your Copy of MEGA '99: Adventures of an Appalachian Trail Thru-Hiker

On July 1, 1999, I began a five and a half month journey that took me from Maine to Georgia. Covering over 2,000 miles on foot, I experienced the wilderness like never before, made countless friends along the way, and gained a healthier perspective of myself and how I fit into the world. By December 14, 1999, I completed my trek atop Springer Mountain, Georgia. The following day I was on a plane back to Minnesota and beginning life anew. I still get caught up in the day-to-day grind, but the journey had a profound and everlasting effect on me. One of the primary rules thru-hikers abide by is “if you don’t use it every day, don’t bring it.” This would clearly be difficult to adhere to in normal life, but the lesson continues to inform my choices about material possessions. I got rid of so much junk when I returned from the trail and, although I do enjoy having certain “stuff” nowadays, it’s minimal compared to most and what I do own directly supports my passions and adventures. MEGA ’99: Adventures of an Appalachian Trail Thru-Hiker is an illustrated memoir about my experience thru-hiking the Appalachian Trail. The book is 172 pages and includes over 160 black and white illustrations (based on photographs I took while hiking the Appalachian Trial). MEGA ’99 is appropriate for readers ages 16 and up. *All fonts used in the production of Gruesome Tales are courtesy of Blambot.com*

“I was lost in thought as I hiked, not realizing how far I had gone. It felt great. I was in no rush and had no particular destination to reach…”Jared Manninen 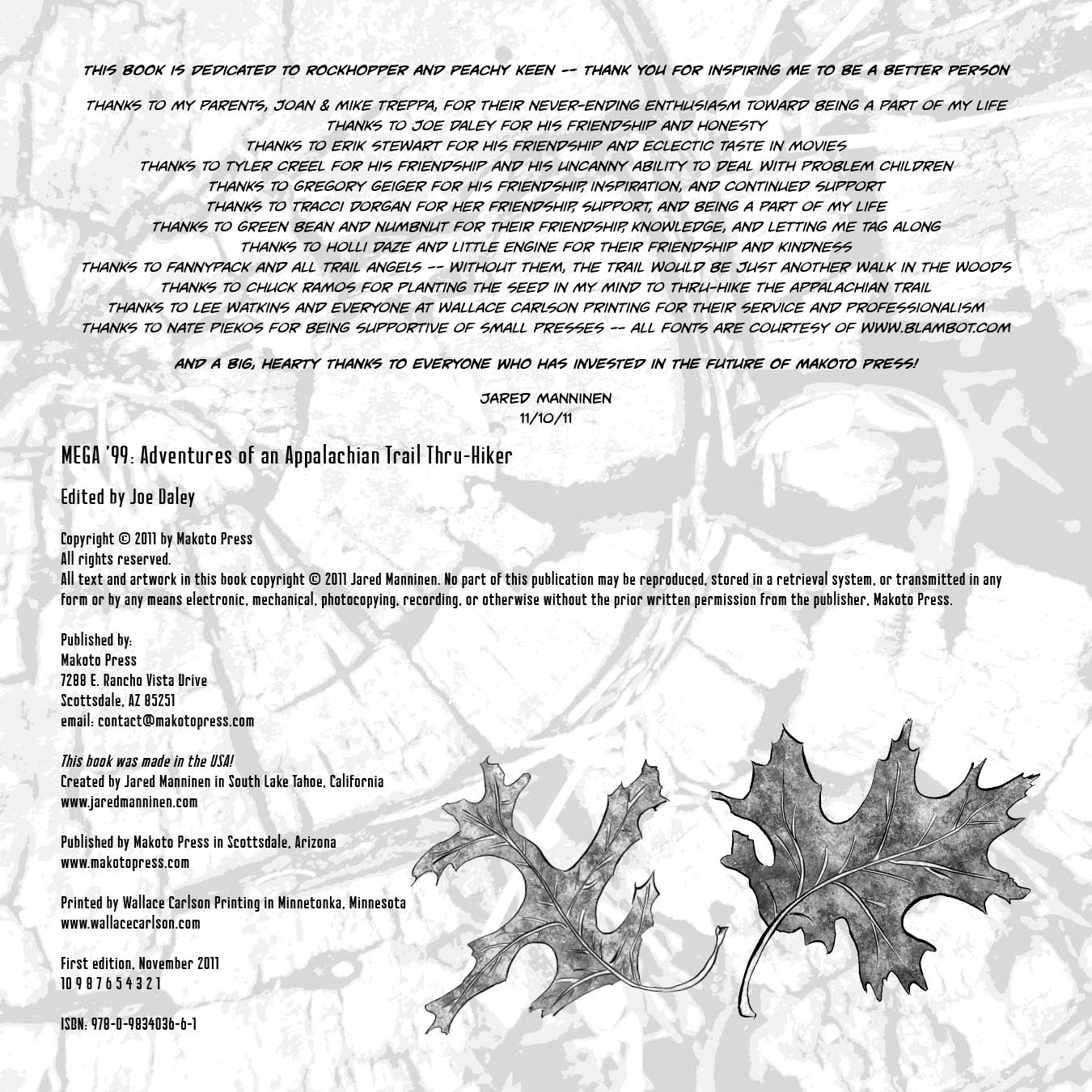 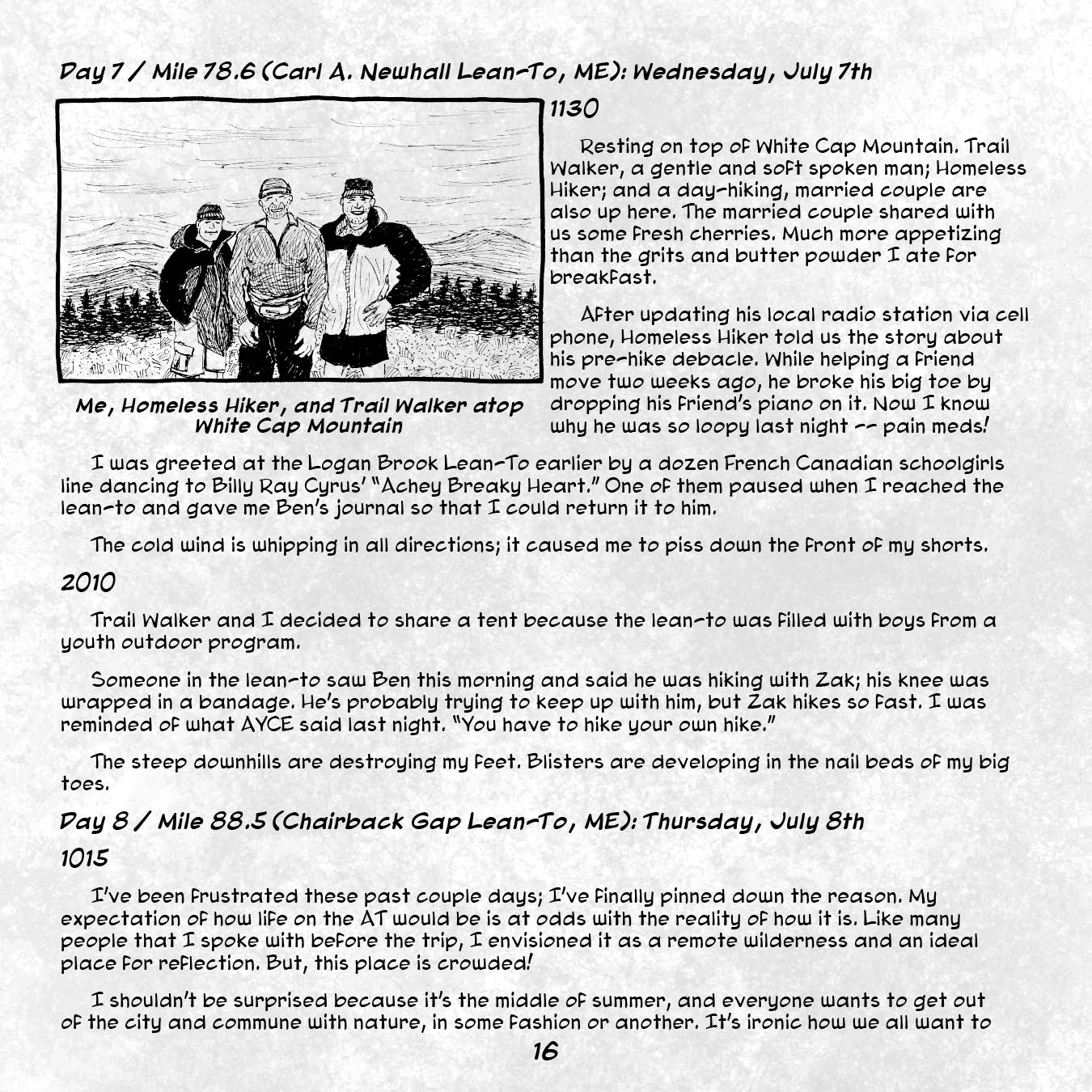 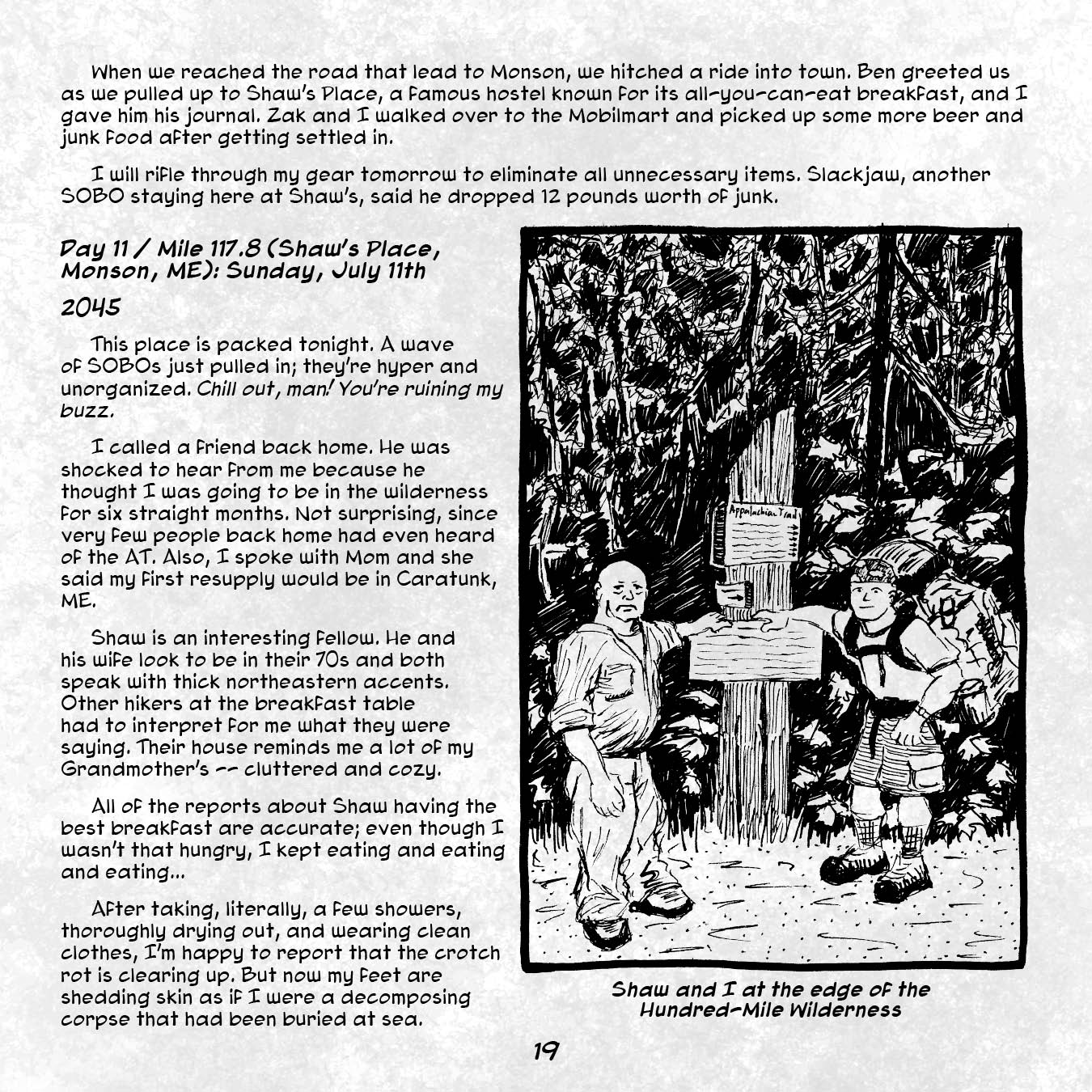 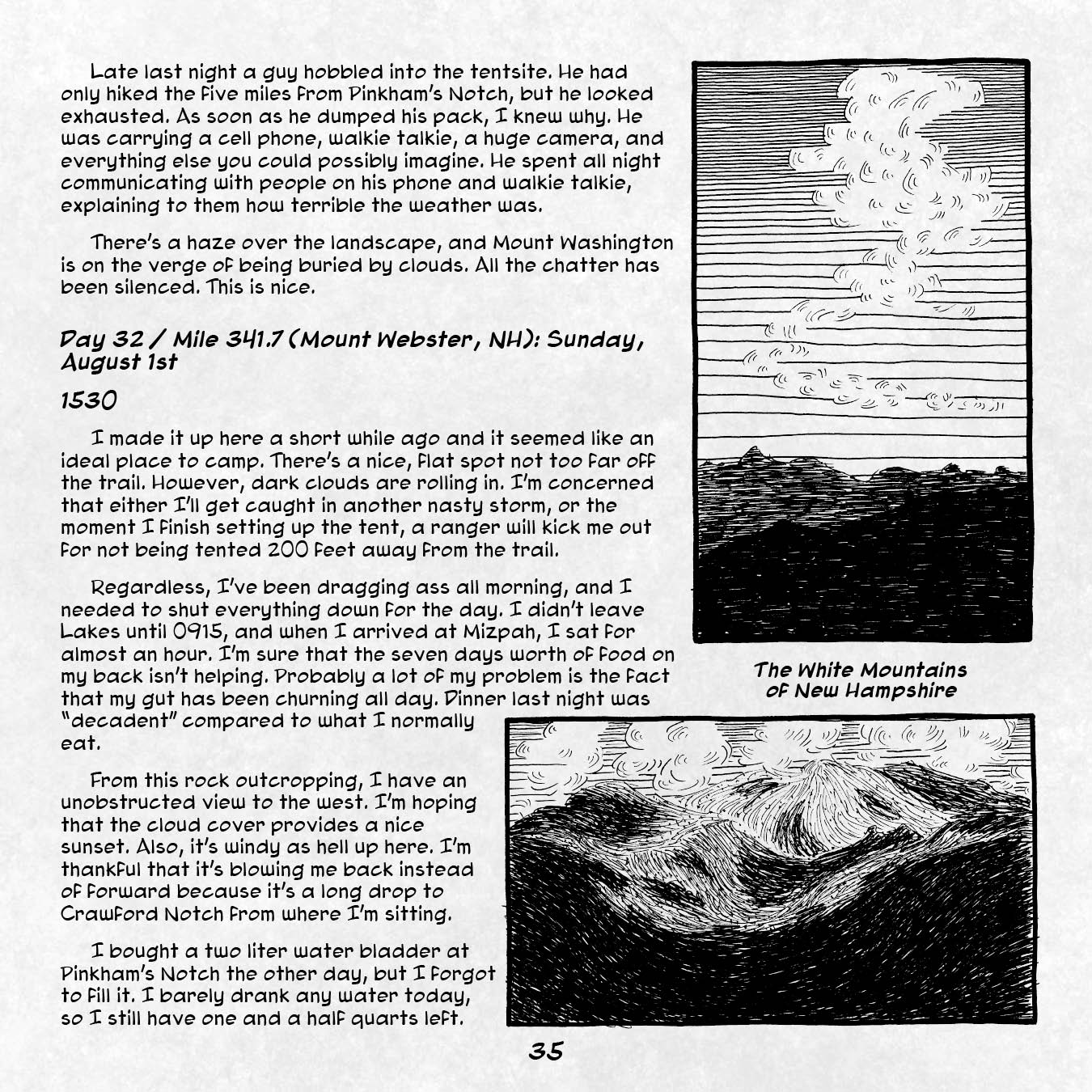 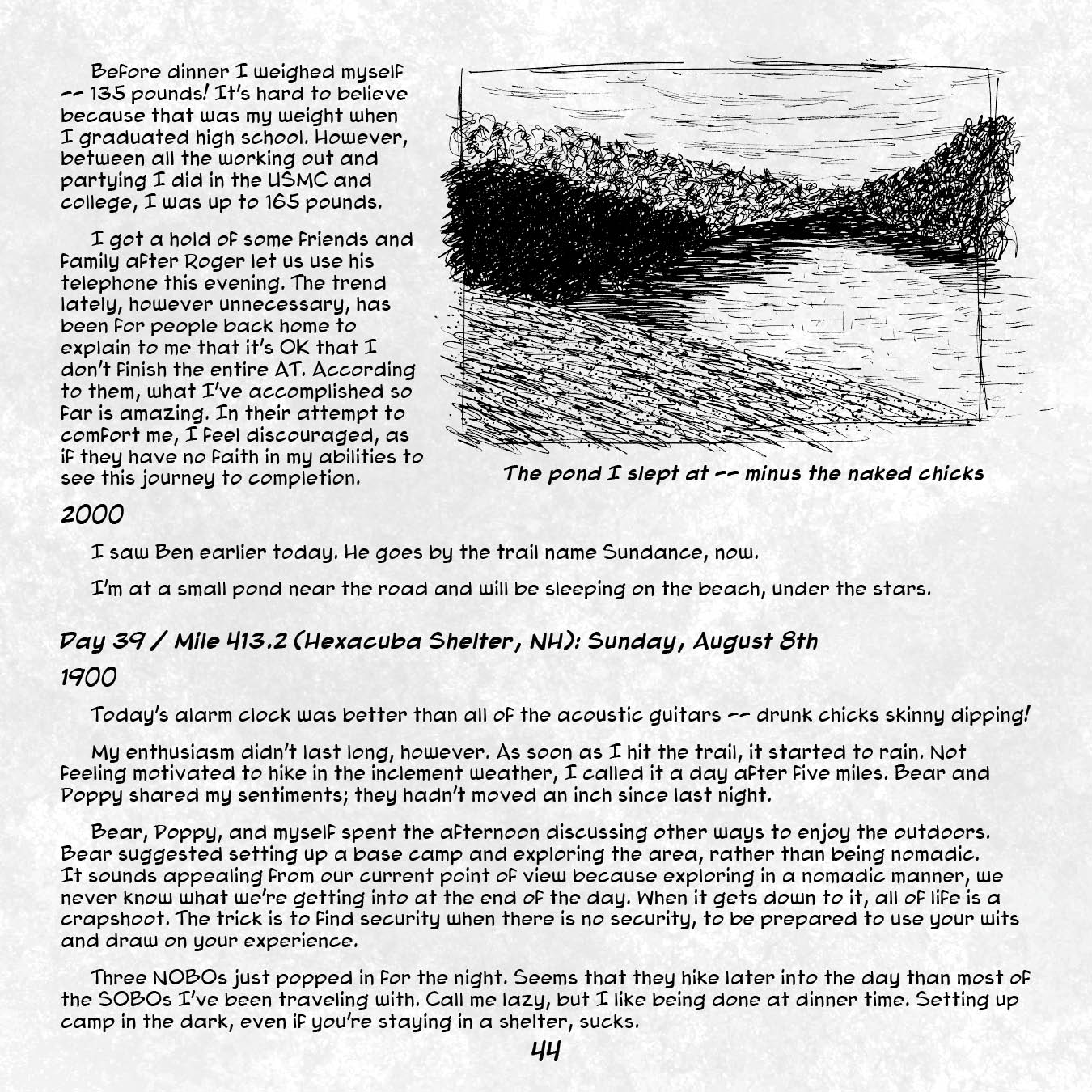 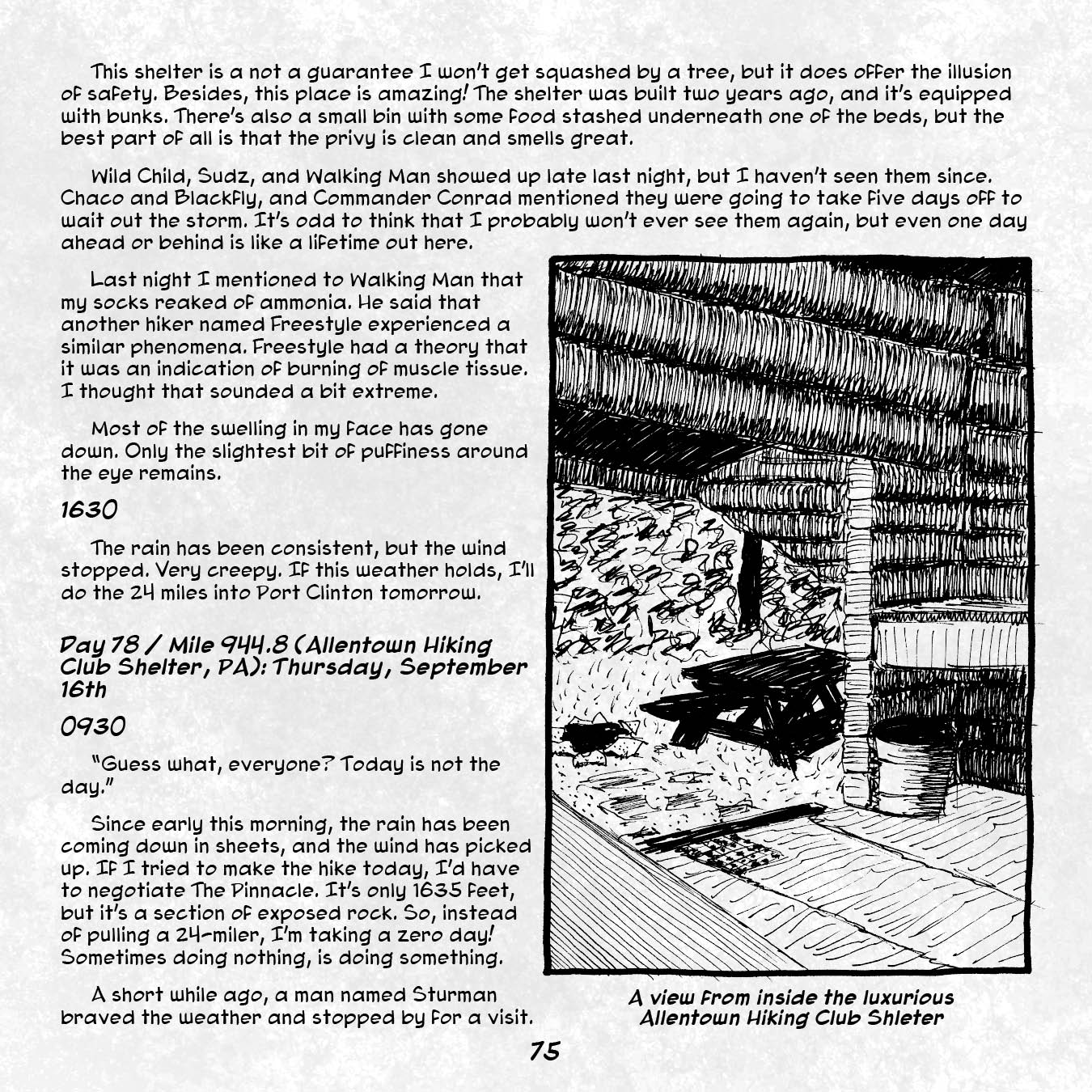 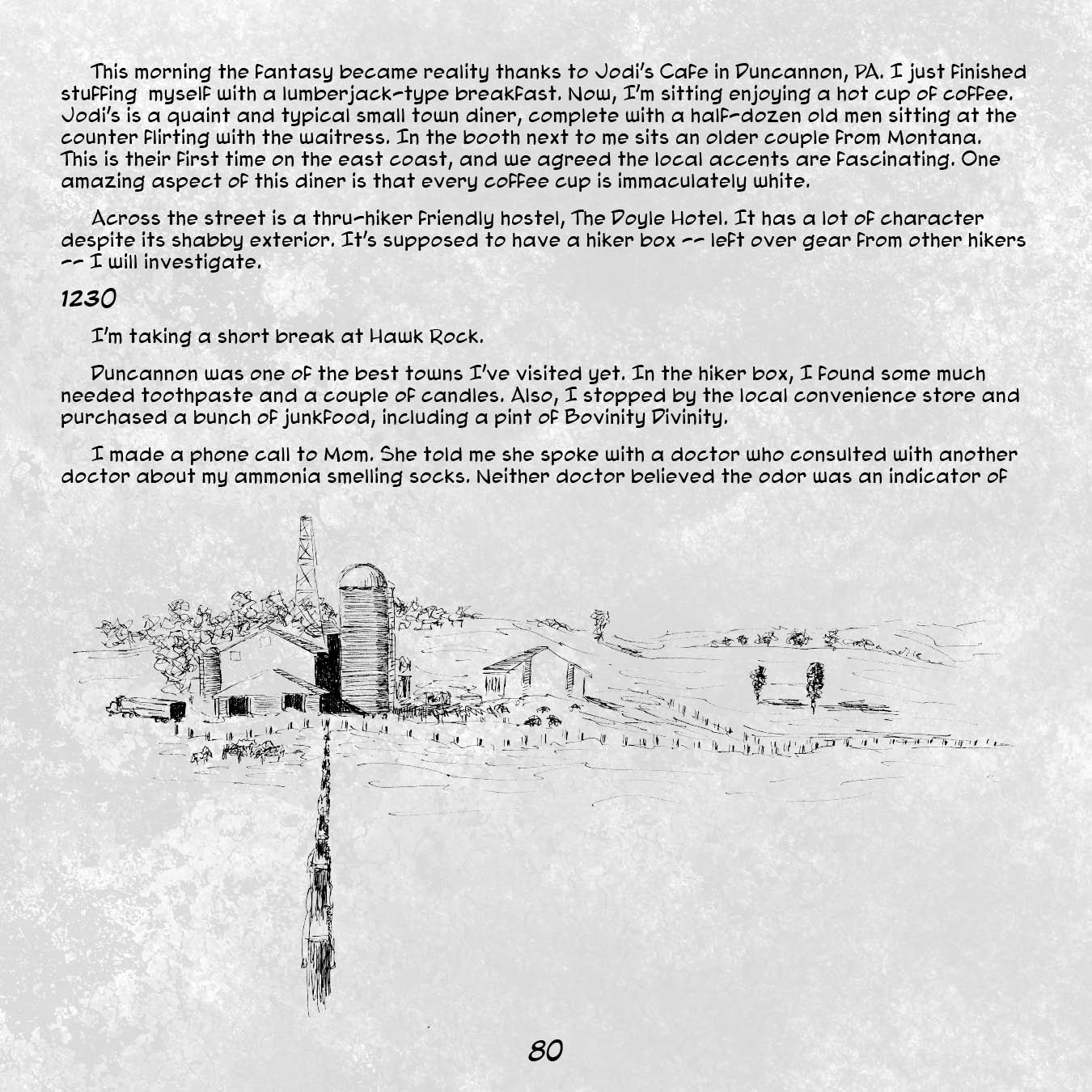 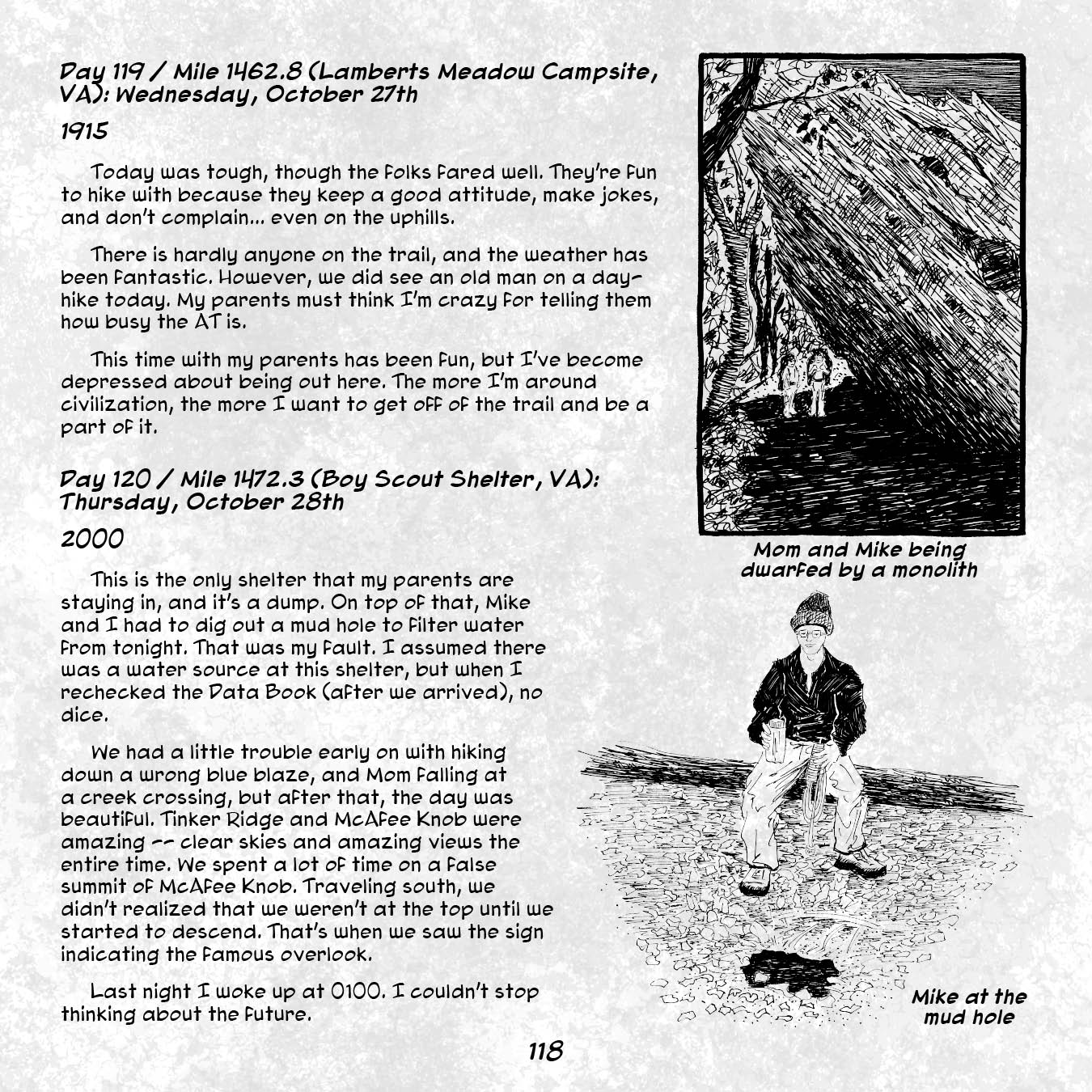 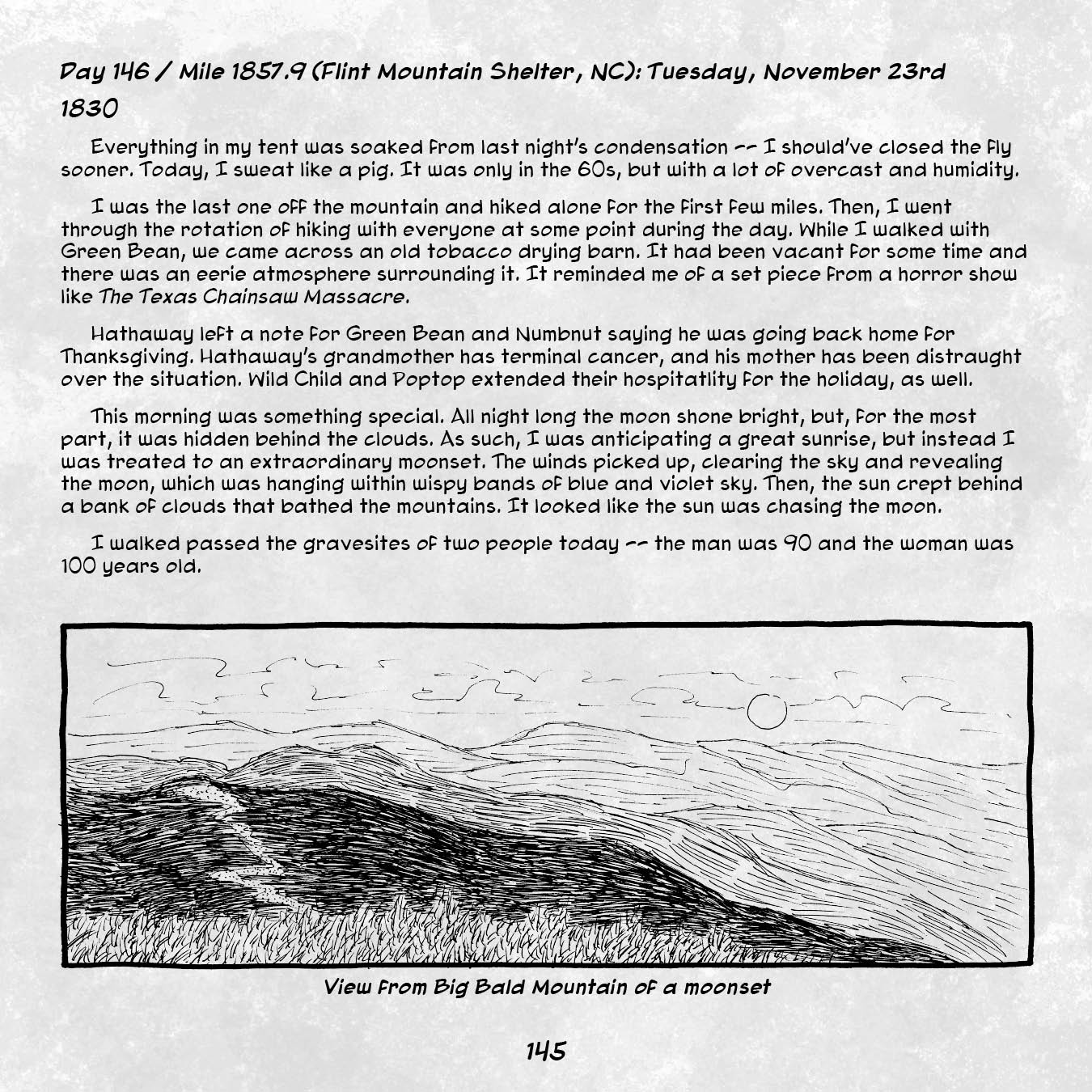 MEGA ’99: Adventures of an Appalachian Trail Thru-Hiker was over a decade in the making. In 1999, after graduating college, I hiked the Appalachian Trail. During the five and a half month journey I kept a number of journals about the experience, as well as taking roughly 900 photos. I had an actual film camera at the time – digital cameras were yet to come! So, I had all of this documentation from the trail but no clear vision for how I wanted to share it, beyond the occasional show-and-tell presentation for one group or another. After hiking the Appalachian Trail, I went back to school and became a professional massage therapist. I dove into that career for six years and, during that time, continued to draw and paint but essentially shelved the Appalachian Trail project. More years passed, as they tend to do, until I was laid off from a corporate job, went on unemployment, and self-published a horror anthology graphic novel. Those books were printed in Minnesota so I could visit my folks when I picked them up. And, it was while I was outside shoveling snow from their driveway that the idea to create an illustrated memoir about hiking the Appalachian Trail was conceived. I wanted to capitalize on the momentum I had created by self-publishing my first book, and this project seemed right up my alley. All of my photo albums and journals were at my parents’ house, so I took them back to Lake Tahoe and started working on the book as soon as possible. There were plenty of challenges to overcome, but thanks to having the experience from publishing my first book under my belt, I was able to crank out MEGA ’99 in about seven months.