An Intimate Look at Spring

For people who follow me on social media, my posts probably give them the impression that I’m desperately clinging to winter. Or, I’m just plain crazy. They wouldn’t be too far off the mark on either accounts. For the 2018/19 season, I’ve logged 129 days on cross-country skis, traveled 638 miles, and have climbed over 73,000 feet of elevation gain.

At least that’s what I’ve done so far. In spite of it being May, I continue to cross-country ski.

But here’s the thing – as I chase the snow higher into the mountains, I experience spring far more intimately than I ever have before. There’s something fascinating about witnessing firsthand the day-to-day transformation between seasons. Clearly, indicators of the passage of time and change of seasons are found throughout the year as well as at closer and safer locations. I could just watch, for example, the transition between winter and summer in my front yard and on my way to work. However, my backyard (i.e. the Sierra Nevada Mountains) is far more expansive and interesting to explore. Besides, the contrast of spring in the mountains is so stark and compelling, it begs to be experienced on a personal level. 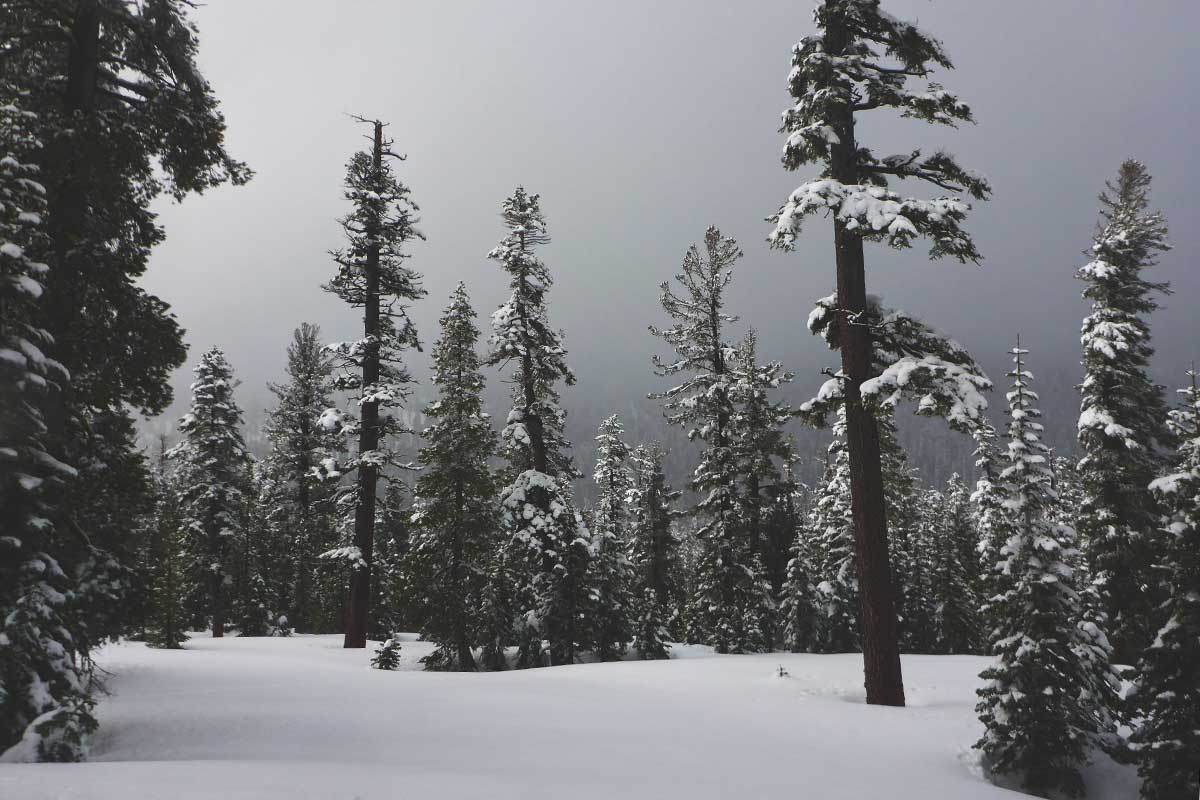 On April 23rd, 24th, and 25th, I cross-country skied across massive swaths of snow in Hope Valley. The general area in which I was skiing sits somewhere between 7,200-7,500 feet in elevation. What I found interesting was that with each subsequent day, I had to negotiate more water features and creep a little higher up the mountainside that runs along the northern edge of the valley.

Then on April 26th, when I traveled a 12-mile loop that included briefly dipping down into Hope Valley, I knew it would be lost within a day. So I cherished the mile or two of skiing in the valley before officially saying goodbye to it for another year. Big deal, right? Snow melts. 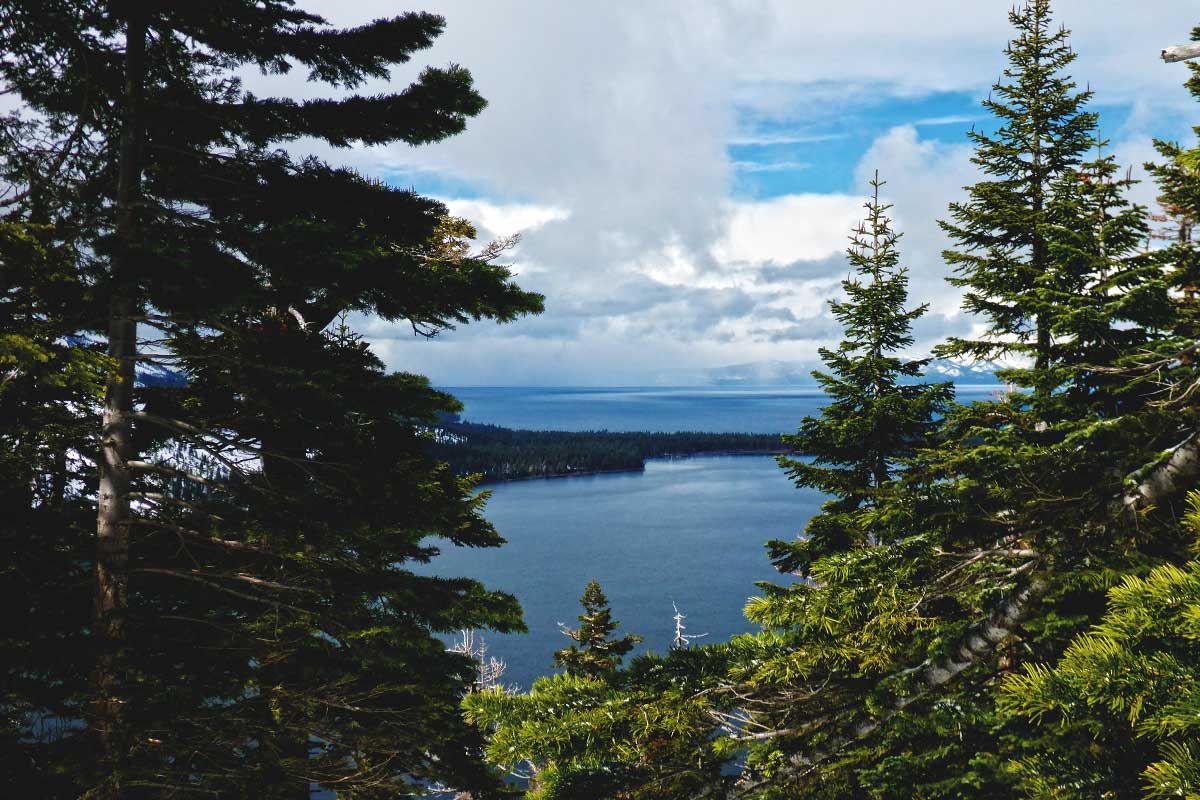 Believe it or not, I’ve lived in snowy climates for 39 of my 44 years. So if it sounds like this has been the first winter I’ve ever experienced, that’s kind of my point. Due to the fact that this past winter at Lake Tahoe was so abundant, I made the commitment early on to devote myself to cross-country skiing as often as possible.

This commitment, then, essentially helped to build the framework from which I viewed the entire winter. It provided me with a new way of seeing and experiencing the winter and world around me. 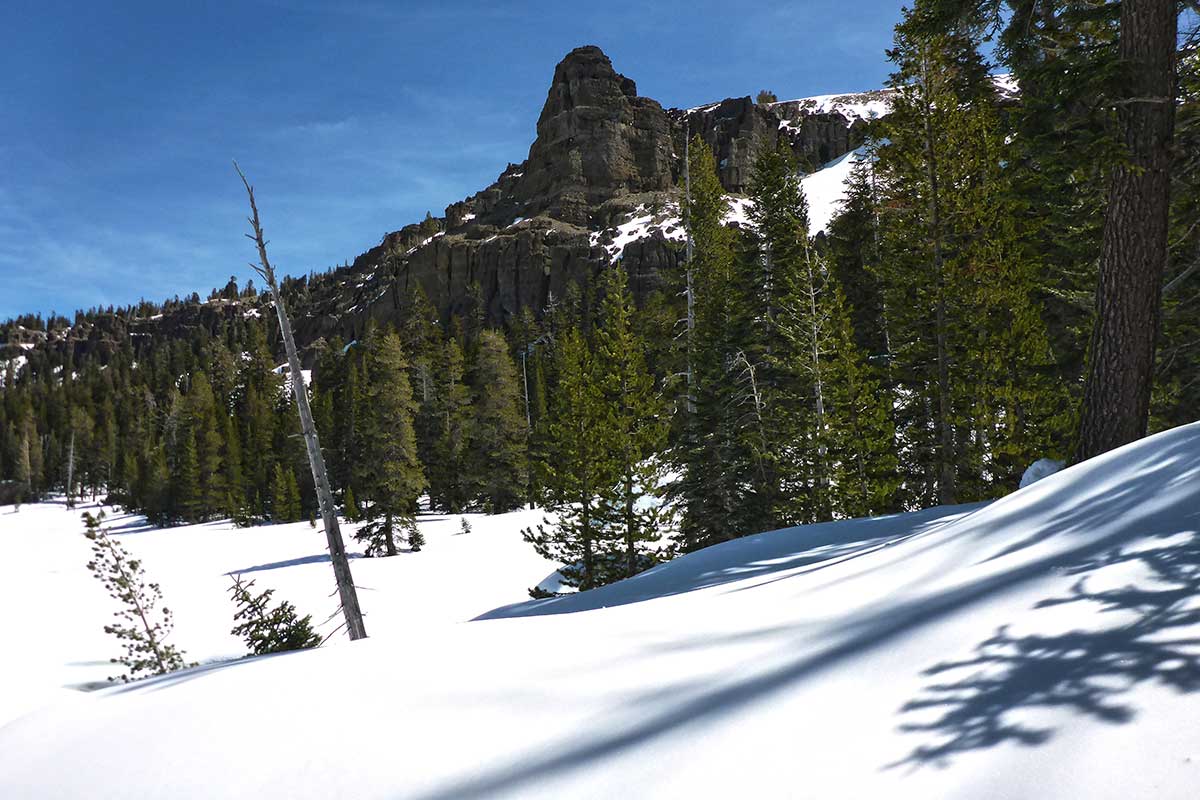 Cross-country skiing to and around Round Lake on April 17, 2019. © Jared Manninen

However, every day I skied required me to study the snow in order to determine where I could and couldn’t travel, what type of ski I would use on the adventure, and how much clothing and gear I would wear. The range of options for any of those questions is far wider in the winter than any other season, so you really have to understand what it is that you’re about to get yourself into lest you wind up in a dangerous predicament. Once you’re in the snow, you perpetually perform the calculations in your mind as to how much further you can travel and how much faster you need to ski in order to beat the setting sun, for example. One eye is monitoring the snow over which you’re cross-country skiing while the other is looking to the sky to identify any weather patterns that may indicate that a storm is rolling in.

Because I skied so much this winter, the experience became (for lack of a better word) routine to the point where I knew exactly how far I could push myself and my gear on any given day. Whereas many people would turn the event into a production and obsess over gear and terrain selection, I was able to treat the experience like I was just going to the gym for my usual daily workout. Again, it’s not say that any of this became rote. Snowy mountains simply became my natural habitat. 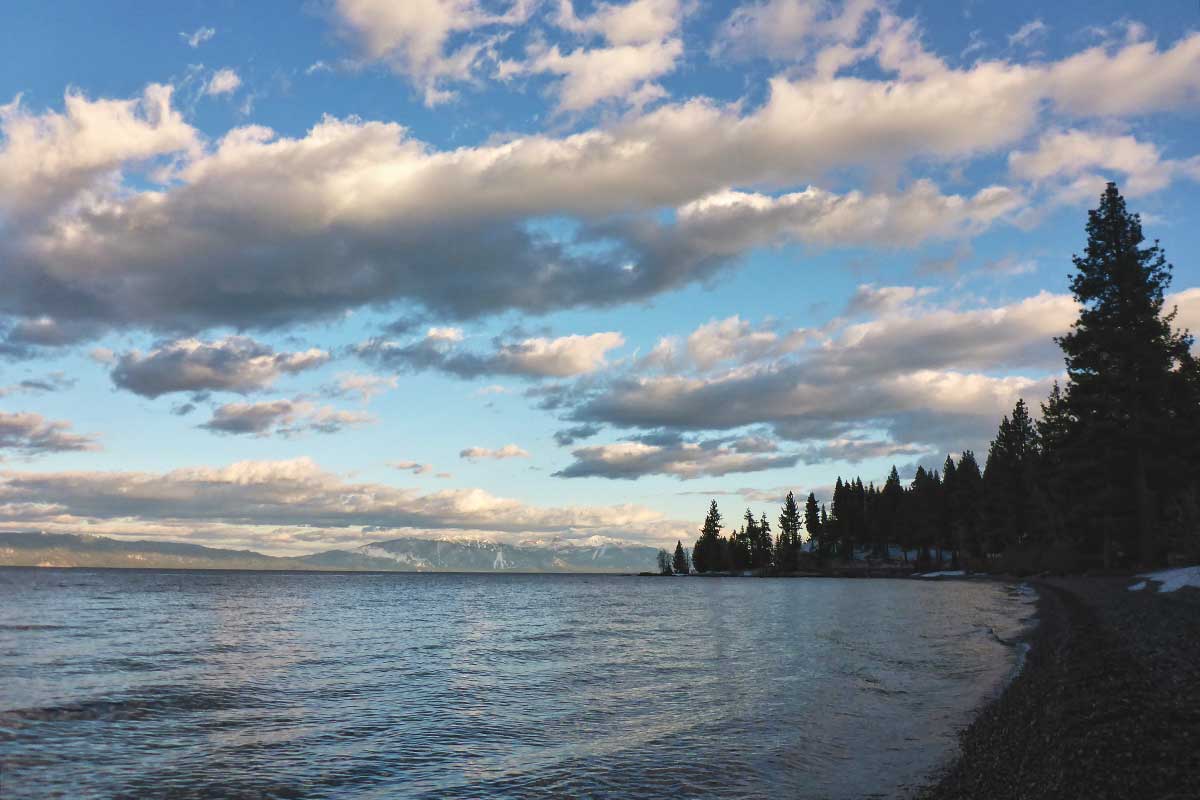 Driving home on April 21, 2019, which was my last day of work at the cross-country ski center in Truckee. We had officially closed for the season that same day at 5pm. © Jared Manninen

But now as I migrate higher into the mountains in search of snow on which to ski, I can’t help but feel like a species on the edge of extinction. For how much longer and further can I travel up the mountain before I reach the summit and there’s nowhere left to go?

Ultimately, the answer to that question is pretty straightforward. I’m going to lace up my hiking shoes and hit the trails. Then I’m going to spend the summer embracing the mountains and all their glory on foot. At some point those mountains will transition into fall. And then, once again, winter will arrive and I’ll resume my adventures of cross-country skiing. 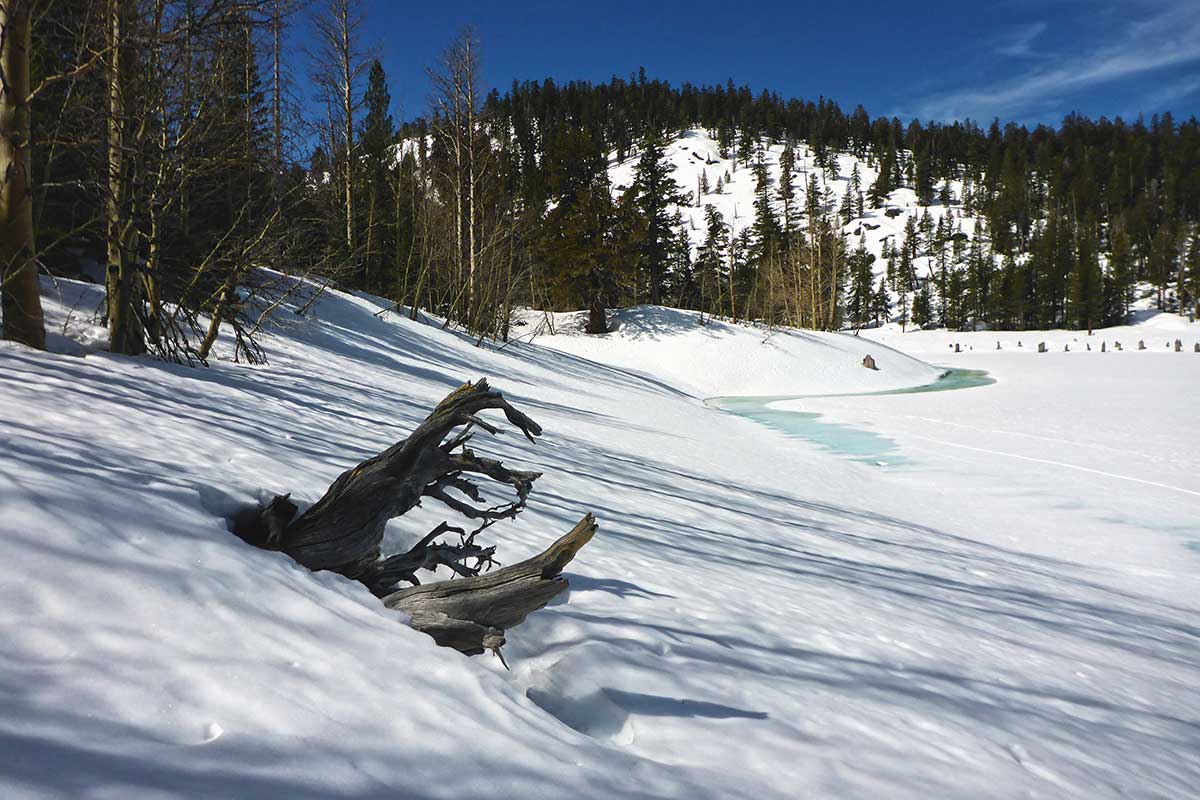 My job at the cross-country ski center in Truckee officially came to an end when we closed for the season on April 21, 2019. I have a few weeks before my summer job begins, so I’ve been spending my time (outside of cross-country skiing) addressing all of the things that I’ve neglected over the winter such as medical and dental appointments, catching up with friends, and continuing to build Tahoe Trail Guide and developing more related art projects.

I realize that these articles about cross-country skiing border on being anachronistic for most of you at this point in the year. However, there’s always a few weeks of lag time with my newsletters since they’re essentially a recap of the previous month. Besides, I’m still cross-country skiing 🙂 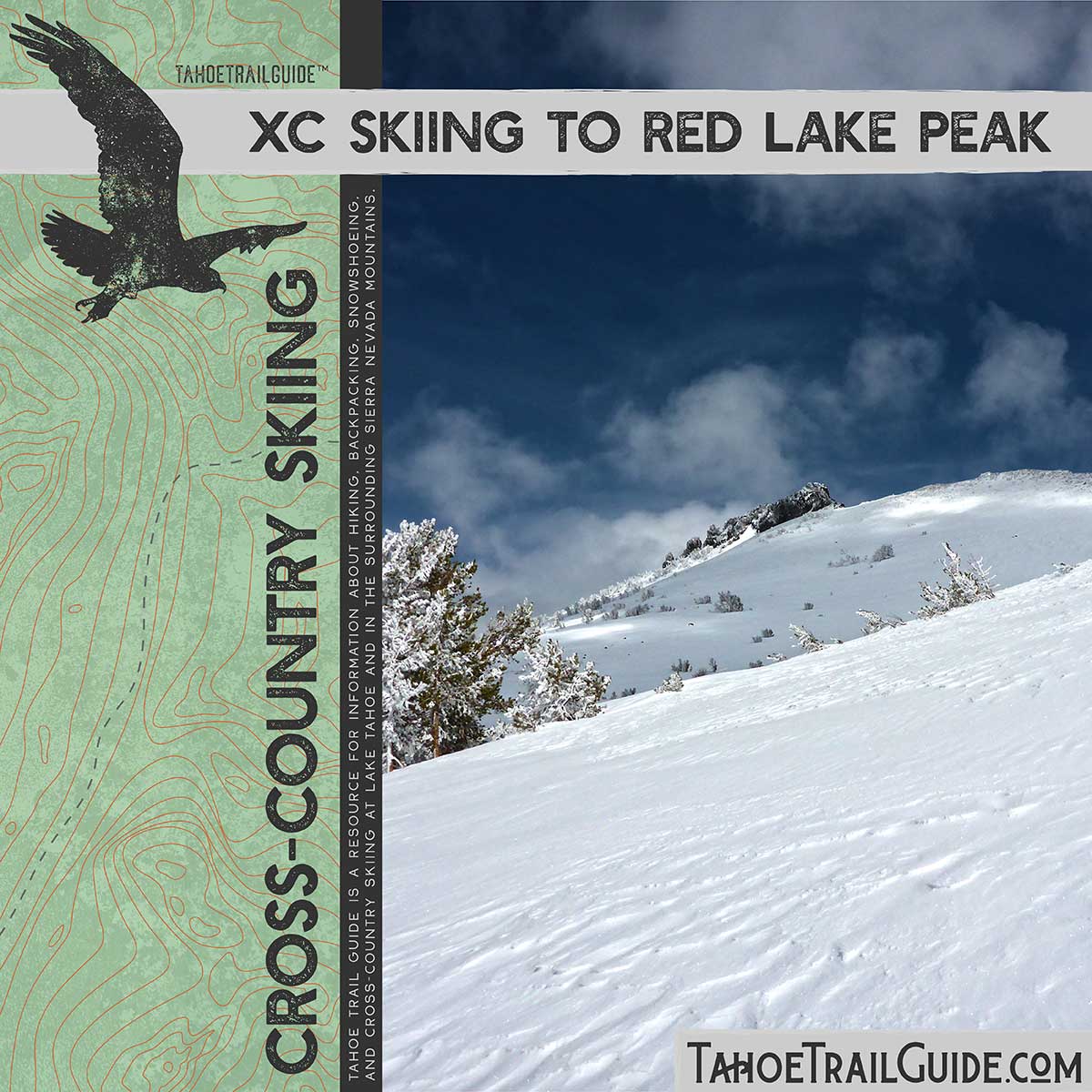 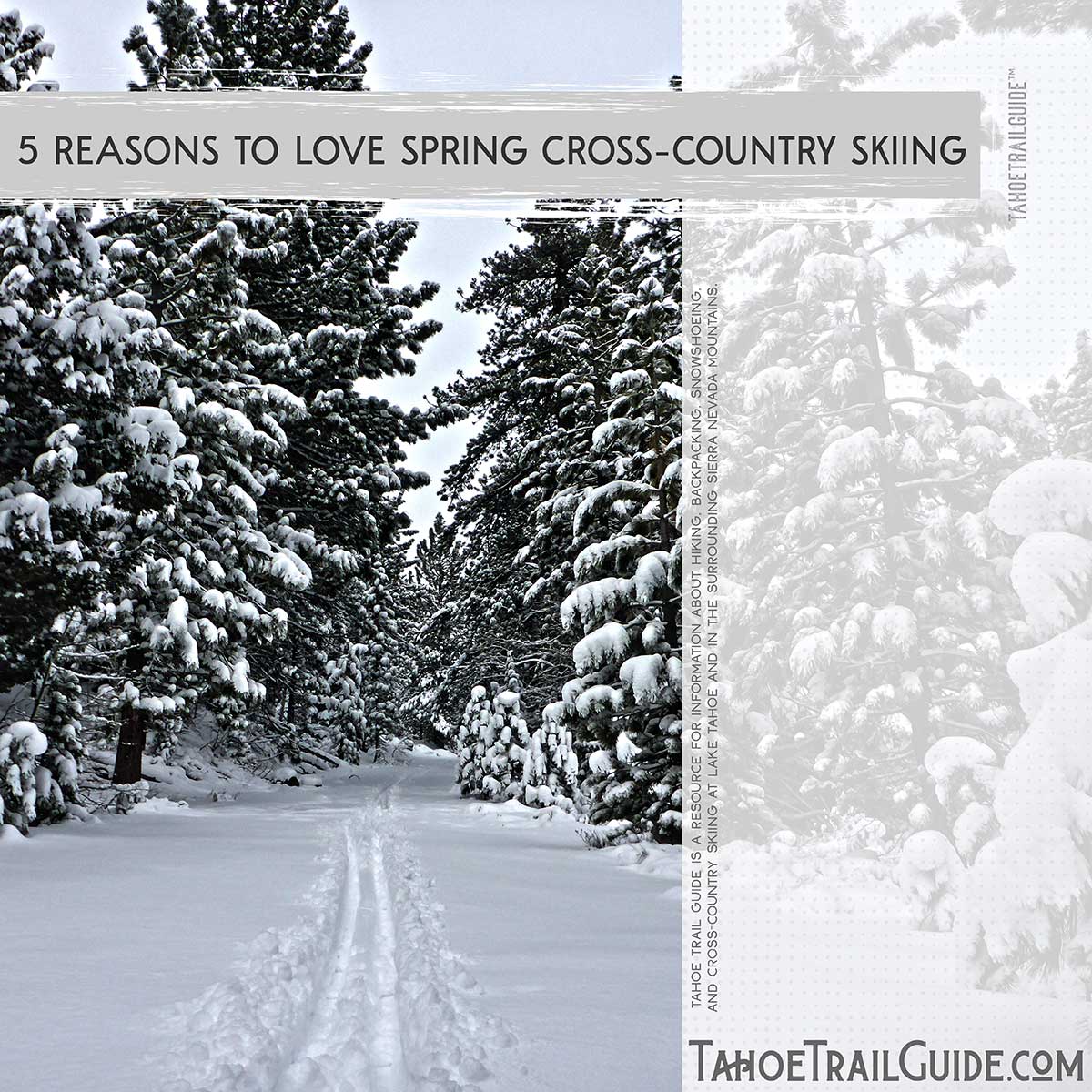 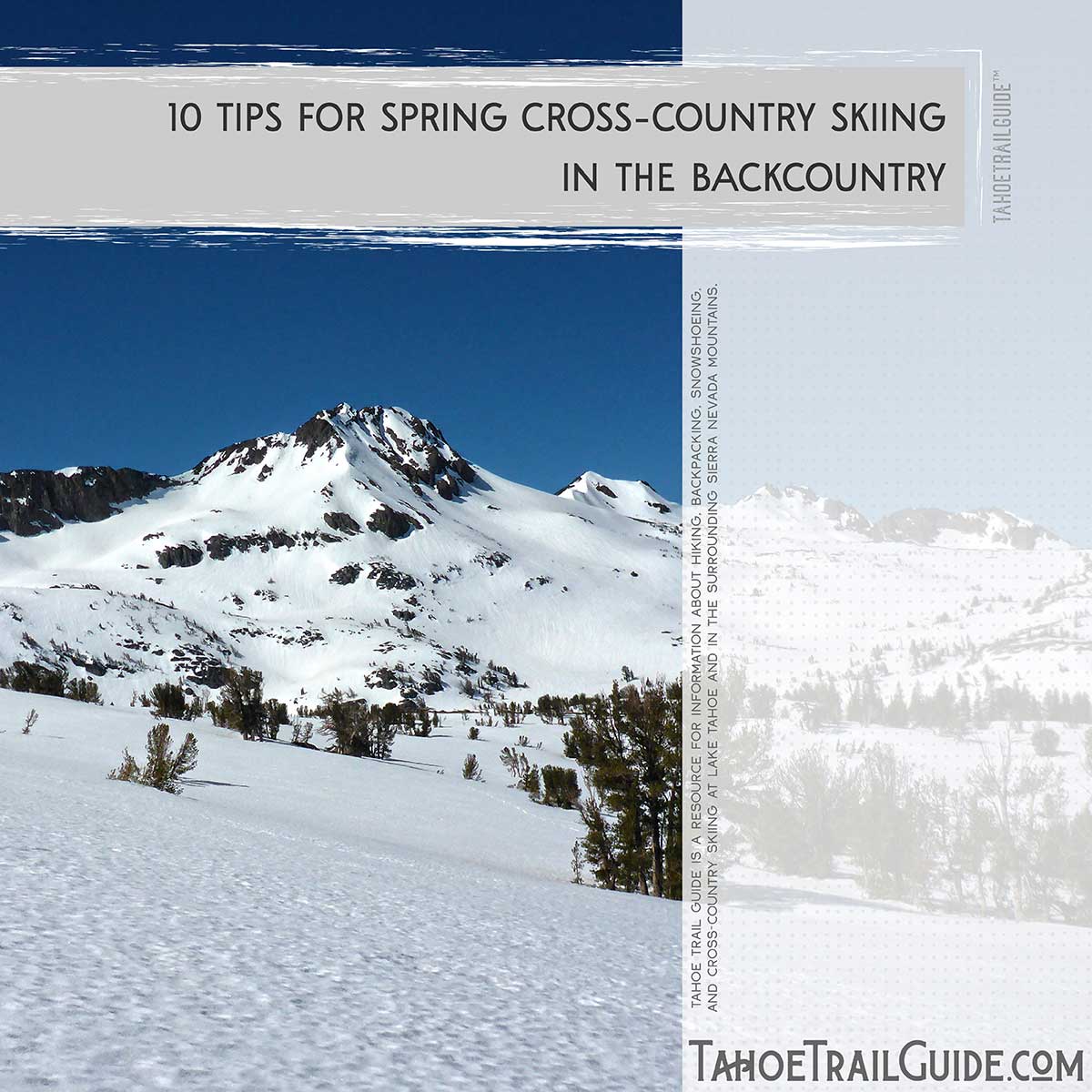 In December 2018, I wrote an article about cross-country skiing along parts of the Pacific Crest Trail near my home at Lake Tahoe. The article was published in the Spring 2019 issue of the Pacific Crest Trail Association’s quarterly magazine. The magazine comes with an annual membership to the PCTA, so I can’t share it here and you can’t actually buy it. That said, I have 5 copies available to give away. Post in the comment section below that you’d like a copy. Then, I’ll coordinate with you via email as to where you’d like me to send/deliver the magazine. Everyone else will have to wait about a year before I can re-publish the article on Tahoe Trail Guide. 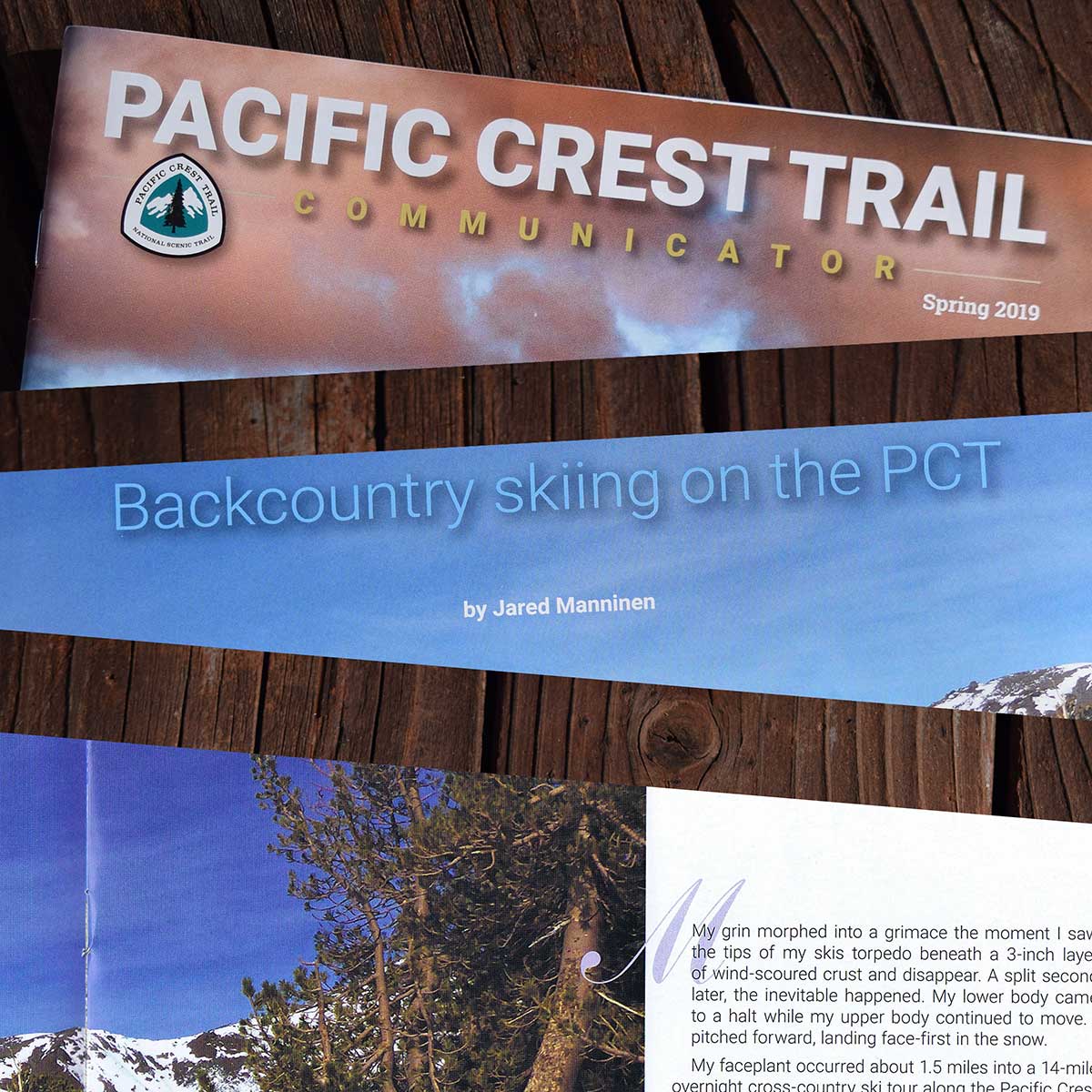