Compared to most places, the mountains look quite different during the spring. Instead of the typical April rain showers that bring May flowers, we receive snowstorms that make for fine spring skiing. So, between working as many hours at the cross-country ski center before it closed for the season, publishing Tahoe Trail Guide articles and updating the website, and spring cleaning and purging, I logged enough days on cross-country skis to bring my total to 60 for the season. Yay.

Now it’s time to move on.

As much as I want the snow to last forever and as much as I love the inherent struggle of winter and the isolation that it brings, I feel good about transitioning into warmer weather. This is the first time in many years that I’ve felt this way. That may seem odd because who doesn’t love summer? 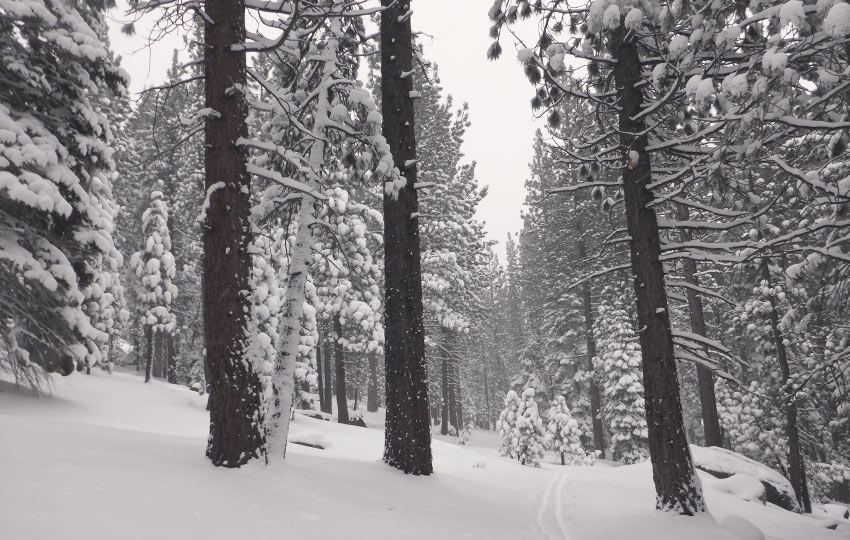 Cross-country skiing during a spring snowstorm in Hope Valley on April 16, 2018. © Jared Manninen

Believe it or not, though, summer has always been my least favorite season. I think it has something to do with growing up in the suburbs during my middle and high school years. Upon the conclusion of each school year, it was like everyone immediately scattered and was out doing something exciting somewhere else without me. I know this is only my perception and not reality, but I always secretly felt a sense of dread as the days ticked down to summer vacation. It’s not like I was alone or didn’t do anything during the summers, however. I had plenty of friends around and we always played pick-up games of baseball, basketball, and football, or went to the arcade, the movie theater, or got some cheap seats to the Minnesota Twins games. It’s just that deep down I’m not a team sport kind of person, nor do I care much for the suburban life of manicured parks, chain restaurants, and shopping malls. 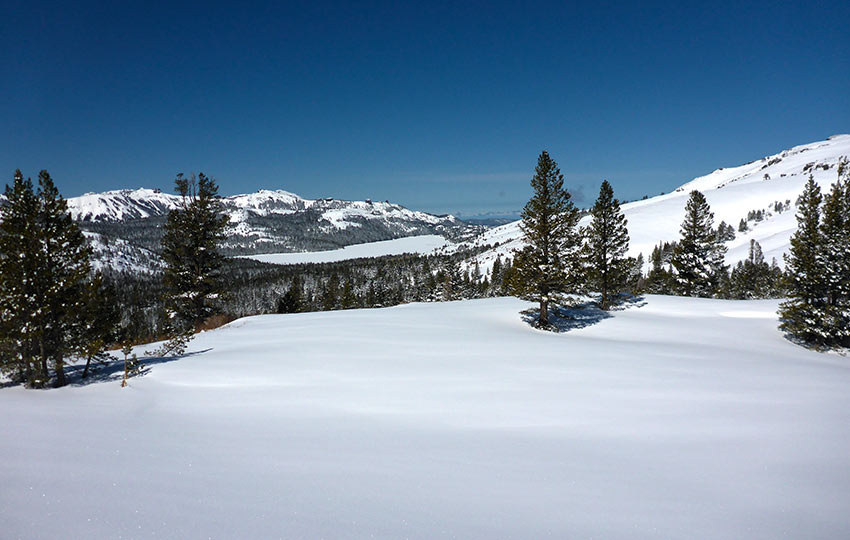 From a whiteout spring snowstorm one day to bluebird skies the following day. Caples Lake is in the distance. Cross-country skiing at Carson Pass (north) on April 17, 2018. © Jared Manninen

The problem was that, like many teenagers, I simply had no idea what I wanted out of life. And all of that free time that came with summer vacation freaked me out because without goals or a purpose, I had nothing specific toward which to work. In a lot of respects my hobbies growing up were nothing more than time-fillers, and much of my summers were spent waiting either for inspiration to strike or a sign to present itself telling me what to do with my life. The result was that I often just felt as if I was being left out or left behind.

There’s no question that I love school because I love to learn. However, equally important (at the time) was that school provided structure (purpose) and a community (constant interactions with classmates) that essentially distracted me from asking myself those esoteric questions that tend to manifest during the quiet periods and moments of isolation in our lives: 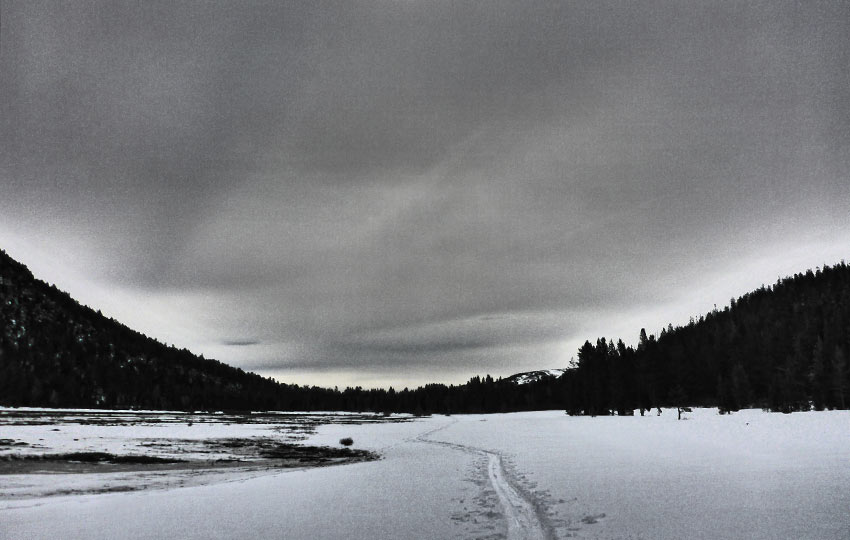 Back to ominous clouds and fierce winds after the previous bluebird day. Cross-country skiing at Grass Lake on April 18, 2018. © Jared Manninen

Interestingly, the isolation I experience while on an outdoor adventure and being the only person on the trail is at the opposite end of the spectrum compared to the general feeling of being left out in life (isolated) because of a lack of goals or purpose. This is not to say that I’ve somehow figured it out or that I’m immune to becoming lonely (on or off of the trail), but at least now I know the score. I can act upon, in a positive way, those triggers that cause any feelings of dread and hopelessness because now I know what they look like.
When I achieved my 60th day of cross-country skiing, it was a bittersweet experience. I’ll probably go out a couple more times before the snow has completely melted but, for all intents and purposes, the season is over. The question of “Now what?” reared its ugly soon after that last ski, but instead of falling into a funk I took a week to gather my thoughts and re-calibrate my mind. 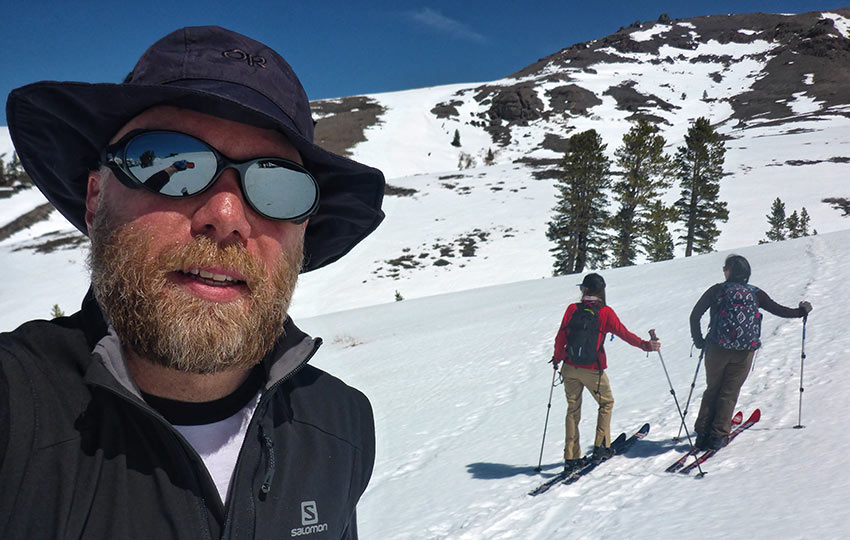 Cross-country skiing with friends at Carson Pass on April 23, 2018. The snow conditions were that of an ideal spring skiing day – creamed corn for a couple of hours immediately followed by sticky mashed potatoes (the signal that it’s time to call it a day!). © Jared Manninen

After running some errands in town one of those days, I took a spontaneous walk down to Baldwin Beach and spotted two Bald Eagles flying circles overhead. I was instantly reminded that I live in a playground and that there’s so much more I want to experience and to learn about this place.

So it appears that school is back in session. 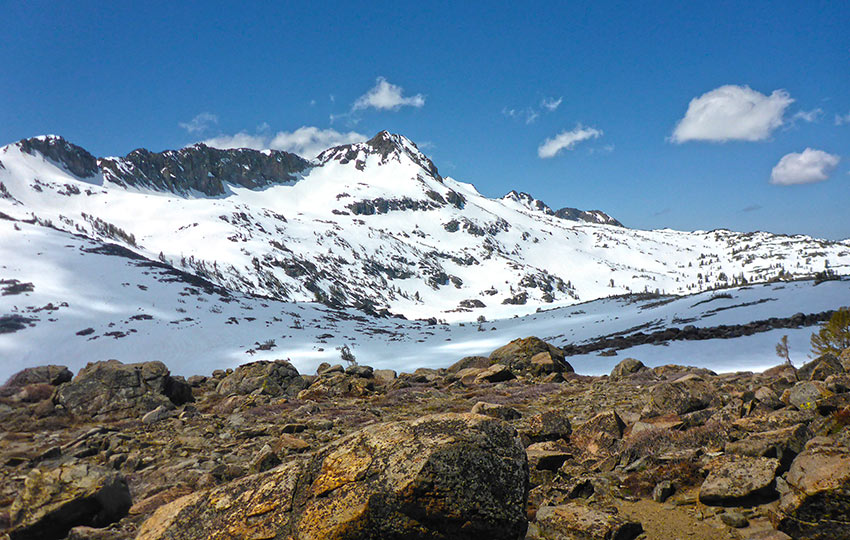 These are the articles I wrote for Tahoe Trail Guide last month. The first is the fourth installment of my backcountry planning series, the second is an essay I wrote about the overnight cross-country ski trip I took in March of 2016 (related to the video below), and the third article is about hiking to South Camp Peak on the east side of Lake Tahoe. 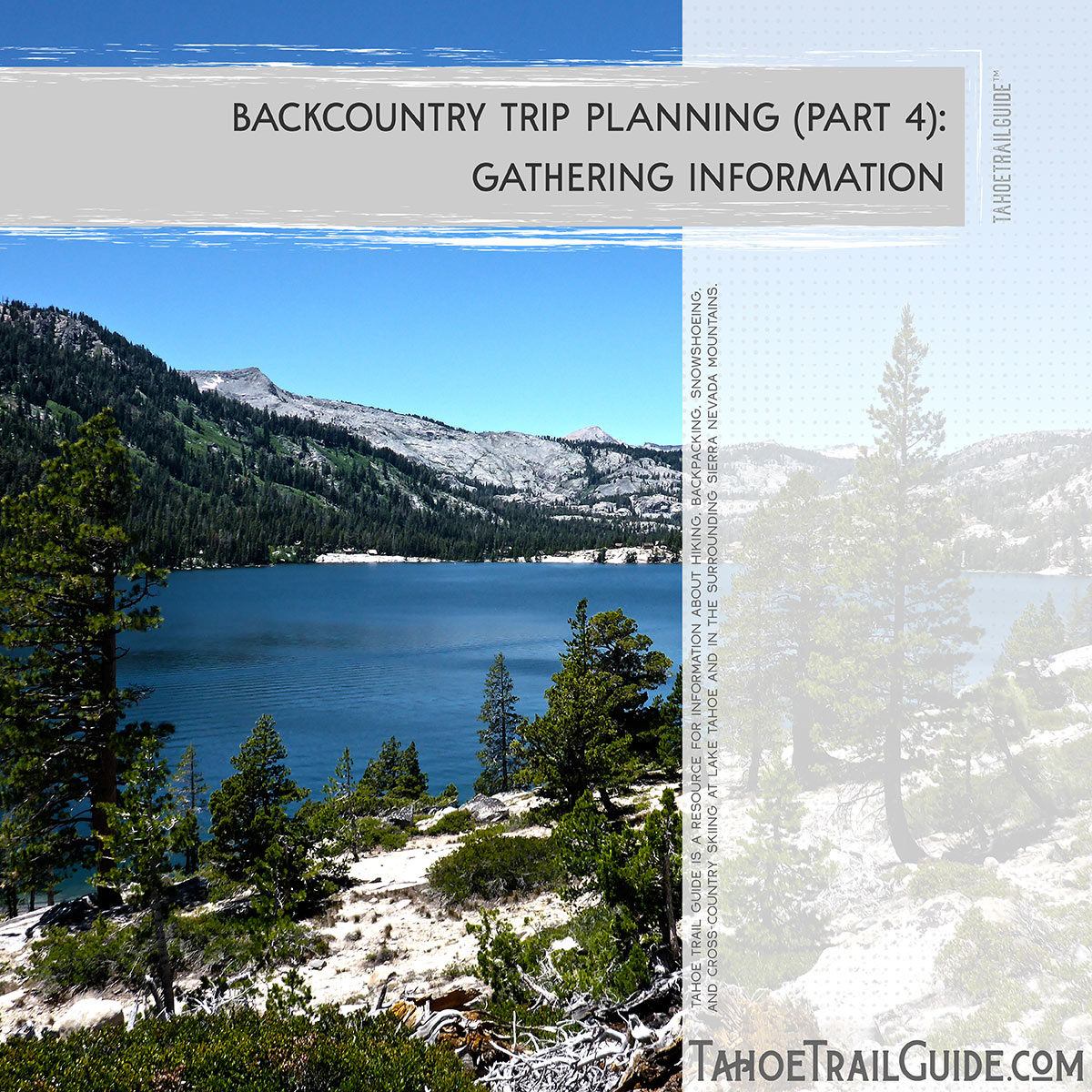 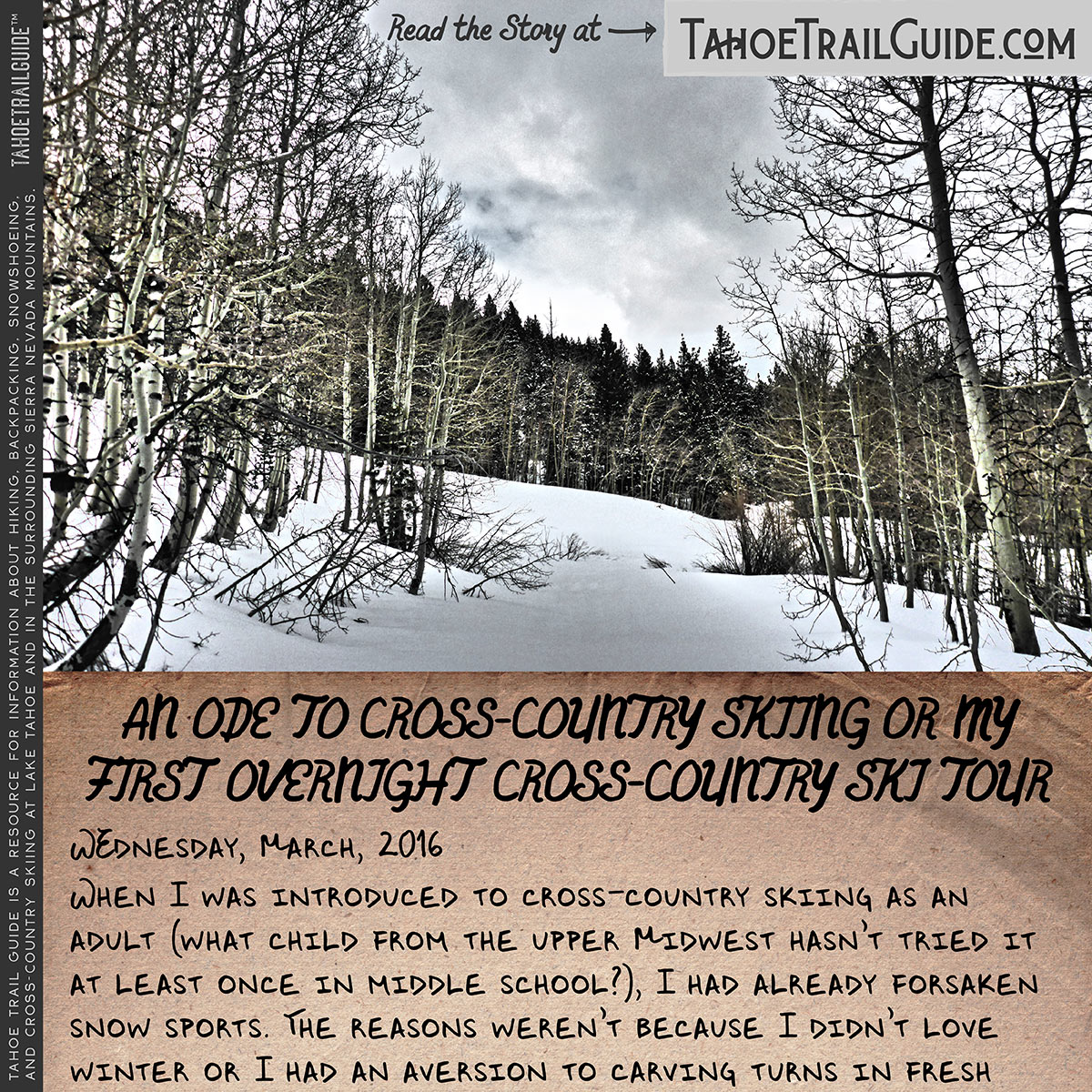 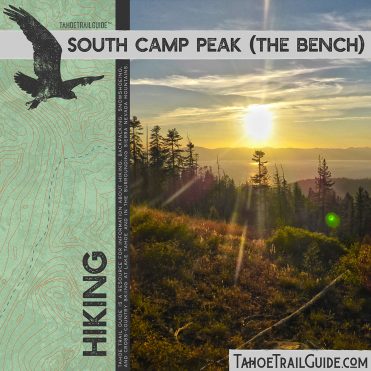 This short video is based on the essay I wrote (article above) about my overnight cross-country ski trip up to Thompson Peak. I admit it’s essentially a glorified slideshow, but it’s only about six minutes long and features 40+ images from the experience, as well as some original music in the background by my best friend Erik. My goal with this video was to experiment with different ways in which to tell stories.

Here’s a map I designed for use with my Tahoe Trail Guide blog. The idea behind this map was to section out the Lake Tahoe region into four quadrants to make it easier for people navigating my website to find appropriate (i.e. closer to them) trails in which to hike, cross-country ski, and snowshoe at Lake Tahoe. Many visitors and people who’ve never been to the lake don’t realize that Lake Tahoe is not a single location. Depending on circumstances, it can actually take between 3-4 hours to drive around the entire lake. A lot of guidebooks and websites designed around vacationing at Lake Tahoe gloss over this fact. Although I work on the north shore in the winter (on weekends), I seldom drive up there any other time of the year because it’s a commitment. People, particularly from more populated areas, sometimes raise an eyebrow at me for lamenting having to drive an hour and half, for example, to get to the other side of the lake. For them, that hour and a half is merely their daily commute. For me, as well as most Tahoe locals, we make every effort to spend more time on the trails and less time in our vehicles and that usually means sticking closer to home.

The map I created of the Lake Tahoe Region for use with my backcountry blog TahoeTrailGuide.com

If you’re in need of stock photography for graphic design projects, I have some for sale via Creative Market.